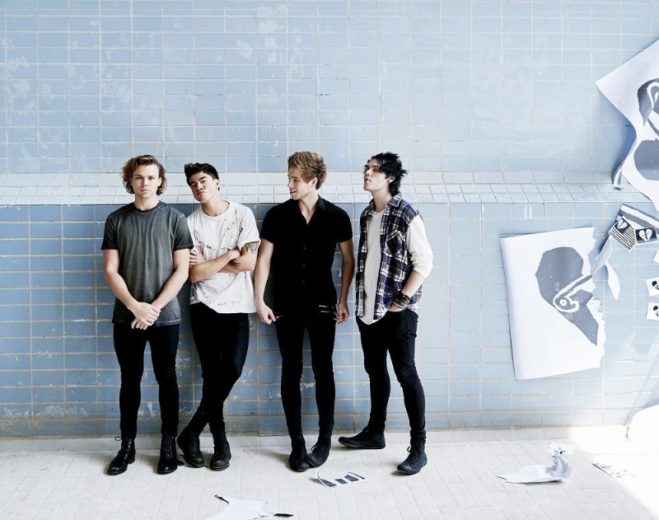 LOS ANGELES, Oct. 16, 2015 / — On the heels of wrapping up their hugely successful “Rock Out With Your Socks Out Tour,” 5 Seconds of Summer announce plans to return to North America next summer for another extensive run. The SOUNDS LIVE FEELS LIVE tour, produced by Live Nation, will kick off on July 1 at Mohegan Sun Arena in Uncasville, CT and include shows at Hersheypark Stadium in Hershey, PA (July 2), New York City’s Madison Square Garden (July 15) and The Forum in Los Angeles (Sept. 7). See below for itinerary.

Fans who order 5 Seconds of Summer’s new adrenaline-fueled studio album, Sounds Good Feels Good, via the band’s store HERE will have early access to tickets. The album will be released next Friday, Oct. 23, via Hi or Hey Records/Capitol Records. It is the follow-up to the band’s chart-topping, self-titled debut, which has sold more than three million copies worldwide.

The official video for “Hey Everybody,” the band’s new single, premiered today on VEVO and can be viewed HERE. Directed by Isaac Rentz (Cage The Elephant, Blink 182), who also helmed 5 Seconds of Summer’s “She’s Kinda Hot,” “Good Girls,” “Amnesia” and “Don’t Stop” videos, the clip finds Mikey in a hot dog costume, Ash dressed as a dinosaur, Calum walking dogs and Luke stuck in a terrible internship.

“Hey Everybody” – along with “She’s Kinda Hot,” “Money,” “Jet Black Heart” and “Fly Away” – are available instantly to fans who pre-order the digital version of Sounds Good Feels Good, available HERE. The album hit No. 1 on iTunes in 50 countries just hours after the pre-order launched.

In their second cover story on the band, Billboard noted, “5SOS is an anomaly in 2015: a Generation Z guitar band that sells records.…On Sounds Good Feels Good, the guitars thunder more…” Alternative Press, which awarded the album four stars, observed, “Sounds Good Feels Good delivers….The album finds its crux in the first single, ‘She’s Kinda Hot,’ with the triumphant line in the chorus: ‘We are the kings and queens of the new broken scene.'” Kerrang hailed it as a “killer new album” and gave it four K’s, noting, “Opener ‘Money’ explodes into one of the biggest anthems of the year.”

“She’s Kinda Hot,” which won Song of the Summer honors at the 2015 MTV Video Music Awards, topped the iTunes charts in 44 countries and was a Top 15 hit at Top 40 radio. 5 Seconds of Summer spent three months living together in a studio in Los Angeles, writing and recording Sounds Good Feels Good, which was executive produced by rock veteran John Feldmann (All Time Low, Good Charlotte, Boys Like Girls).

The band is among the all-star lineup of artists featured on the 2015 iHeartRadio Jingle Ball tour. The New York City show, which will take place at Madison Square Garden, will be streamed live on Yahoo! at www.yahoo.com/iheartradio on Friday, Dec. 11, at 8 p.m. ET and a 90-minute special will air on The CW on Thursday, Dec. 17 at 8 p.m. ET/PT.

5 Seconds of Summer’s self-titled debut album entered the Billboard 200 at No. 1, selling 260,000 units in the U.S. in its first week of release, marking the biggest debut for a new act in 2014 and the biggest debut ever by an Australian artist. It topped the iTunes charts in a total of 76 countries. The band has won numerous awards, including an American Music Award, a People’s Choice Award, five MTV European Music Awards, an MTV Video Music Award and an iHeartRadio Music Award. In 2015, 5 Seconds of Summer played to more than one million fans across three continents, including three massive sold-out nights at the SSE Wembley Arena in London.

5 SECONDS OF SUMMER are on the line-up for the following dates of the iHeartRadio Jingle Ball 2015 Tour: