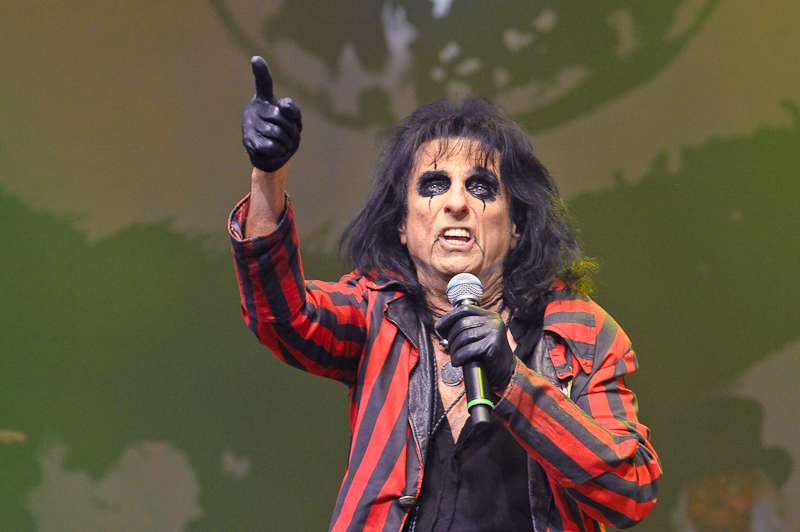 AUSTIN, TX – February 12, 2015  The sky was like a framed piece of black velvet art, the temps were 1970’s-era cool and on this weeknight, the line was wrapped around the building and buzzing as if school was just let out for Summer (or Winter in this case). Alice Cooper is one of the most recognizable rock icons of all time. His songs features hook-laden framework, anthematic craftsmanship and are finished with theatrical adornments.

The Rock and Roll Hall of Famer is embarking on the latest leg of the Raise The Dead tour and chose Austin as the spot where he would film his very first live streaming Pay-Per-View special. This meant camera crews and cranes were among the bystanders in the packed Moody Theater. An uneasiness of the PPV recording serving as a distractive disservice could be felt but it wasn’t, if anything it fueled the band more to display more grandiose stage gestures which added to the festivities.

The crowds aesthetics ranged from top-hat Steampunks to rail-thin tattooed rockers to high-heeled video vixens to loose-fit dad-jeans and band tees ensembles. A few rock n’ roll looking Stephen King-doppelgangers could be seen lurking on the concourse as well. The median age was smack-dab in the middle of age. The libation most imbibed was aluminium pints of Bud-heavy and rum mixed with carbonated sweet-colas.

A drop-down curtain with a graphic of Cooper’s trademark eyes was draped over the stage. Once the fabric fell, all concertgoers rose to their feets–some hand-clapping, others hands unable to because they were preoccupied iPhone filming the event, so instead they screamed–and all showered Cooper with adulation as him and his six-piece band played “Hello Hooray”.

Pyrotechnics white-washed the stage and out came the ringmaster as he crooned apropos lyrics like “Hello! Hooray! Let the show begin/I’ve been ready Ready as this audience that’s coming here to dream/Loving every second, every moment, every scream”. The choir obliged the instructions.

“House of Fire” displayed the most 80’s moment of the night as the arena/glam rock harmonies ignited the room. The three guitarists (Ryan Roxie, Nita Strauss, Tommy Henriksen), bassist (Chuck Garrick) and drummer (Glen Sobel) had disparate looks from one another but had one thing in common, prolific musicianship. Cooper’s vocals in the number were crisp and dusted with gravel and precious crystals.

A Pavlovian response ensued after the first lick of “No More Mr. Nice Guy”–the crowd was salivating. Cooper strutted around the stage complete with a cane and settled into his showman role as his signature voice did the manual labor.  During the chorus, Cooper pointed the mic out towards the onlookers, letting them do the heavy-lifting during the air falsetto runs that ended each stanza.

Cooper played the part of conductor for “Under My Wheels” as he non-verbally instructed the guitarists to out-shredder each other. The ending was chaotic and had a “Twist and Shout” Beatles-esque ending to it. More on the lads from Liverpool later. During “I’ll Bite Your Face Off”, the bass parts tenderized said faces prior to mastication and Coopers biting vibrato did the chewing.

“Billion Dollar Babies”, originally a duet with Donovan, saw the frontman working with a fencing-sword that had billion dollar novelty currency lining it which he shook off for front row souvenirs. The vocals we’re a bit more complex, with the hypnotic, syncopated pre-choruses and wails. The lead singer pulled it off without a hitch. For the 2011 release “Caffeine”, Cooper earnestly gushed about the temporary energy boost that is Caffeine. I wondered if this was an ode/analogy to a former exotic dancer with the same moniker as the songs title that the troubadour may have had designs on, but alas, the over-sized coffee mug he had on stage, and the fact that he’s older, made me realize he genuinely loves java.

“Lost In America” jolted the venue. Every lyric was echoed and all escaped to that point in life where having a job to pay for a car to get a girl was of the utmost importance. The angst was palpable and hook could have kept looping the rest of the night and no one would have minded. “Hey Stoopid” was timeless and dated–in an sonically nostalgic sense. The harmonies were seamless but each singers timbre managed to stick out.

The show to this point was much more playful than anyone could expect.

The dynamic and rawkus “Dirty Diamonds” harkened to the sense of urgency that Sabbath’s “Paranoid” and boasted bass and drum solos that stole the show up until that point.  The dark and funky “Welcome To My Nightmare” saw Cooper wearing a live boa constrictor as a scarf. The tune is so rich and dense and translates well live from the layered original recordings.

The theatrics went into high gear at this point. Aural senses were still stimulated but for the next ten songs, the visual components were at the forefront.  “Go to Hell” had some sadomasochism undertones during the performance.  Penned for an installment of the Friday The 13th horror film series, “He’s Back (The Man Behind The Mask)” saw Cooper adding dramatic affectations to phrases while a girl on stage was kidnapped by hockey-mask donning Jason. The girl ended up returning to the stage and then stabbed Cooper. It was all part of the show folks.

“Feed My Frankenstein” was goosebump inducing from the first note of the battle hymn. Cooper was then strapped into a guerne, electrocuted and through the smoke, emerged as a 15 foot version of himself. The admission paying villagers were ready to riot–metaphorically speaking of course.  “Ballad of Dwight Fry” was the soundtrack to the story that was told onstage between an undead psycho nurse and Cooper. A snippet of “Killer” played, then off with Cooper’s prosthetic head. Blood sprayed and the band kicked into a truncated (pun intended) and epic version of “I Love The Dead”.

Now that the character of Alice Cooper was dead, a disembodied voice asked over the loudspeaker “what are you going to do Alice, raise the dead?” Cue tombstones with the name of late-great rockers and the covers of their songs.

Renditions of Jim Morrison and The Doors “Break On Through (To The Other Side)”, John Lennon and The Beatles “Revolution”, Jimi Hendrix’s “Foxy Lady”, and Keith Moon and The Who’s “My Generation” keep upping the ante and saw the room go all in on creating a once in lifetime moment. It brought everyone together and made for reflective and cathartic thoughts after the natural high subsided on the way home.

The arrangements in “I’m Eighteen” were as complex as the woodworking going on with the guitarists and their fretboards. “Poison” felt like the highwater mark of the night. There was an authentic sexual energy and a desperation in Cooper’s voice as if he was singing for the antidote.

After the quickest band off stage, encore transition ever, the group went into the night’s coup de grace “School’s Out”. The dirty opening riff turned the theater into a rock pen of filth. Then when the iconic drum pattern hits with the pre-chorus, nary a cubic inch of person that wasn’t frenzied. During the multi-part rhapsody, the band played a few bars of Pink Floyd’s “Another Brick In Wall”. Synergy, standing ovations, band intros (which happened to be the only time Cooper addressed the crowd with banter) and an extended outro later–it was all said, and done.

After the house music kicked on and the florescent lights illuminated the seats, Cooper’s set was over. As patrons started heading for the exits there was a reverberating feeling that something special happened. It was magic.  No not occult-like, sacrifice-a-blue-eyed-virgin magic–well I mean there was some of that too–rather the, “this speaks to me at an age where no one gets me” kind.

The show was utterly rock n’ roll to the naked, untrained eye. However, now it was clear that the in-your-face, showmanship misdirection was merely a slight of hand illusion to keep you distracted from the trick that was really going; the crowd was turned into their younger selves right before my organs of vision, for at least a night anyways. Not sure Cooper’s aim was to leave us giddy and glowing, but that’s just what the macabre man in black did.