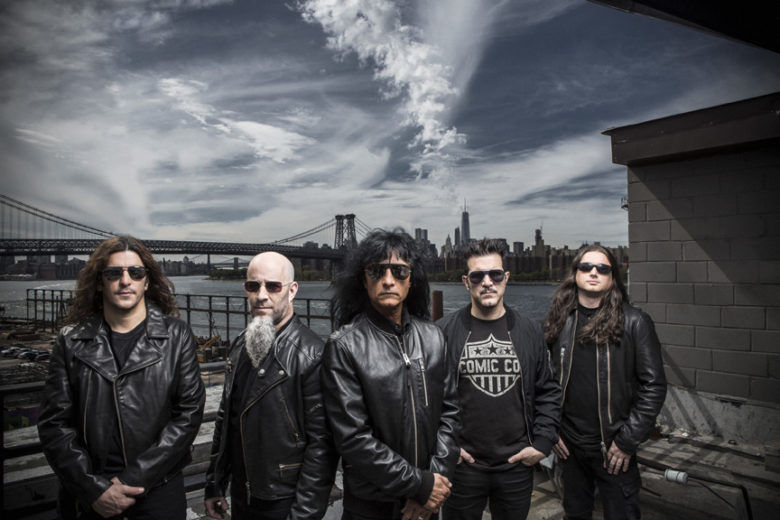 LOS ANGELES, CA – November 19, 2015 – In 2016, Anthrax will celebrate its 35th anniversary as a band, and will release its much-anticipated new album, the aggressive and super-thrashy For All Kings, on February 26 (Megaforce).  But just before that, the band will join Lamb of God for a four-week U.S. trek that starts on Friday, January 15, 2016 in Pittsburgh and wraps up at the Hollywood Palladium in Los Angeles on February 12.  Tour dates are below.

Anthrax recently released “Evil Twin,” the first new track from For All Kings.  The song’s lyrics were inspired by the terrorist attacks that took place at the Charlie Hebdo magazine offices in Paris in January, 2015, and the song is a full-on thrash-metal tune that blasts off with a raging guitar riff, accelerates expeditiously and is completely uncontrollable.  The track’s accompanying video is a compelling barrage of places, victims, actions and some of the infamous zealots and others who have perpetrated violent extremism on innocents around the world, aptly exemplifying the song’s powerful message.

For the new release, Anthrax went into the studio with more songs than they ever had in their career and ended up recording 20.  This wealth of material was largely due to drummer Charlie Benante’s surgeries for carpal tunnel syndrome that caused him to miss quite a number of the band’s 2011-2014 Worship Music tour dates.  Benante put the down-time to good use and came up with a slew of foundation riffs and ideas for new songs that he took into writing sessions with fellow main songwriters Frank Bello and Scott Ian.

The unique chemistry of this dynamic trio is, in part, what sets Anthrax’s music apart from other bands’ in the same genre.  Scott Ian has a very particular way of incorporating his intense lyrical ideas into the band’s music, while Bello, who writes the bulk of Anthrax’s melodies, crafts specifically for Joey Belladonna’s breathtaking voice.  Add to that the searing guitar leads by newest member Jonathan Donais, and it’s no wonder the band is so excited for fans to hear what will be their 11th studio album.

Over its 35-year career, Anthrax has been a pioneering band with its unique style, sound and heavy brand of thrash metal, and, as Metallica’s Kirk Hammett put it, “one can hear their influence on any number of up and coming bands.”  The band has sold in excess of 10-million units, received multiple Gold and Platinum certifications, six Grammy nominations and a host of other accolades from the media, industry and fans.  Anthrax helped break down the race and genre barriers in 1988 when they collaborated with Public Enemy on “Bring The Noise,” became a card-carrying member of The Big Four – with Metallica, Slayer and Megadeth – as one of the four bands that defined the speed/thrash metal genre, and was the first metal band to have its music heard on Mars when NASA played “Got The Time” to wake up the Mars Rover.  Anthrax has always occupied a place out there on the edge.

Anthrax’s tour dates with Lamb of God are as follows: