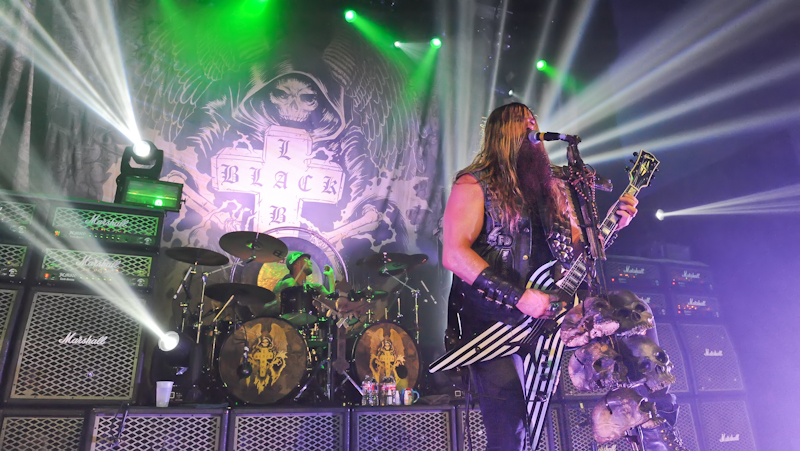 Black Label Society: The Depths of Despair at Emo’s in Austin, Texas (Review)

Austin, TX – August 1, 2014: Finally, a nationally touring metal act decided to play Austin instead of San Antonio, saving many from a day-trip to the least metal spot on earth–The Riverwalk.  Black Label Society doesn’t have fans, they have zealous affiliates who adopt the band’s identity, and have done so for 16 years, nine albums, and at Emo’s Friday Night.

The parking lot was littered with hogs and choppers, giving off the vibe that an unofficial ROT Biker Rally was taking place. Barrel-aged brown spirits, chased by pale lagers were the perfect haberdashery to the all black outfits adorned with Black Label Society “BLS” patches and logos.

Opening the mixed-bag metal bill was Republic of California triad, Kyng.  Texas Rock Report first laid its eardrums on Kyng back in May during the San Antonio River City Rock Fest (http://www.texasrockreport.com/kid-rock-5fdp-and-butcher-babies-at-river-city-rockfest-part-two-review/), where they nearly committed larceny for stealing the show away from Five Finger Death Punch and Kid Rock.

Like all great rulers in history, Kyng took their crown without asking and made proclamations that the tyranny of the separation of hard rock and metal shall be lifted.  The band is more in the vein of Wolfmother or Audioslave phrased with metal amplification.  Opening with “Burn The Serum” served as somewhat of a coronation.  The tune is a complex rhapsody showcasing what the band can do: devastate with precision vocal runs and wails, awe with unconvoluted lyrical imagery, and electro-shock your rock reflexes with drum solos and bass plucking that measure on the Richter scale.

“Sunday Smile” and “Trails In Veins” had riffs from front man Eddie Veliz that were never gratuitous and always fearless.  Seam-bursting harmonies with bassist Tony Castaneda had me taking a double-take to make sure a fourth member hadn’t joined the group on stage.

“Electric Halo” was hooky, and would fit on any hard rock radio rotation in the Continental US.  A cover of “Hot For Teacher” won over the remaining populace yet to pledge allegiance to the Kyngdom.  Even in modern day niche music markets, Kyng could rule by being the exception to the rule that articulate sounds can’t reach broad audiences.

Life imitates art in the case of Wovenwar’s inception.  The demons that As I Lay Dying’s lead singer Tim Lambesis sang about overtook him and he’s now serving a six-year prison sentence for hiring a hitman to kill his wife.  The un-incarcerated AILD band members joined Oh, Sleeper front man Shane Blay and created the melodic metal outfit Wovenwar.

This was Wovenwar’s first ever tour in support of their self-titled debut album, but as their stage presence suggested, this band has been battle-tested.  The five-piece outfit opened with “All Rise”–a dual vocal number with redemption story etched all over it.  “Dead To Rights” was frenetic in the chorus and unleashed in a raucous bridge breakdown.

In between the double-bass drum drubbings and bassline stirring, pathos spilt out from the howls of “The Mason.”  Dynamics and desperation heeded the way for the bands strongest showing in “Tempest,” it’s rife with screeching riffs and vocal phrasing that’s anathematic.  “Identity” incited the first real unison headbanging response from the crowd and made for a memorable mental picture.

Save for a few imbecilic meatheads telling the charismatic Wovenwar to get off the stage–WW female fans were often vocal, which probably made those dumb dudes jealous–their set was without a hitch, and a tour of their own in the Fall will help them create their own identity.

After a 30-minute roadie-led scene change, Emo’s was abuzz–both in the inebriated and figurative way–the legion BLS folks were growing restless.

Black Label Society’s Zakk Wylde is a metal-magi Dorian-Gray whose mythos is only met by the lineage of his prolific-play in the trail of shredded fretboards he’s left in his wake.  Red lights and sirens signaled that the buccaneer brute was set to pummel and pillage onlookers during the first few bars of “The Beginning.. At Last.”  Like an archer setting arrows ablaze, Wylde’s behind the head soloing was shot towards bodysurfers being offered to the security guards as part of a Viking burial ritual.

“Funeral Bell” tolled the arrival of Wylde’s signature register-shifting high-pitched vox, and the band’s imposing sonic structure.  “Bleed For Me” was a two-way street of a performance, the Austin chapter of BLS gave back as much as they took.  Songsmith craftsmanship was demonstrated to the fullest degree with “Heart of Darkness,” Wylde’s fingers are like a shark trapped in Sharknado.  If they stop moving he’ll die–but not before slaying us in the process.

The chorus to “Suicide Messiah” featured a memorable call and response instance that was delivered via electronic bullhorn.  Anytime props are brought out during a rock show, there’s a knee-jerk reaction to roll one’s eyes; however, it didn’t feel like a novelty in the least–not that anything BLS could do could be misconstrued as disingenuous.

“My Dying Time” was a groove-metal cut from the bands new album “Catacombs Of The Black Vatican” that borders on Black Sabbath and metallic-blues.  Virtually all the new tracks were met with horn-fingers and fist adulation.  “Damn The Flood” spewed magma on the sweat-soaked crowd, crusting over while turning the entire venue into hard rock personified.  The band then walked off the stage.

To call Zakk Wylde’s seven-minute guitar solo “epic” would be a misnomer and a gross understatement.  With wah-wah effects and scathing note bends, Wylde had conducted masterclass of guitar neck mutilation.

John Deservio, Jeff Fabb, and Dario Lorina rejoined their bearded leader to play “Godspeed Hellbound” and “Overlord,”which upped the ante as implausible as it seemed.

Enter “Angel Of Mercy.”  The ballad was dubbed as a Dimebag Darrell tribute–Wylde’s fallen friend and former Pantera guitarist–but it also visibly eased the pain of anyone in attendance who may have lost someone.  Wylde sat behind the piano and poured lyrics of mourning and coping into the microphone.  Though most may have had a hard time coping to this, it was a poignant scene where a few libation-lubed tears hit the booze-sheened concrete.

The bassline talking and double neck guitars on “The Blessed Hellride” were triumphant.  “Concrete Jungle” whipped the speakers with (Alice In) Chains.  And closing out the set was die-hard fan favorite “Stillborn.”

As unmetal as this sounds, Black Label Society’s most undeniable quality is that they’re the model of consistency. Their legacy is still being written, but you can see how the narrative will playout.  On the exterior, BLS is doom and gloom, but what they’ve done with their career is to the contrary. They’ve channeled the depths of despair into a songwriting acumen that’s deep, automatic showmanship with messages that ultimately help repair the broken.  Now that’s rock n’ roll \m/