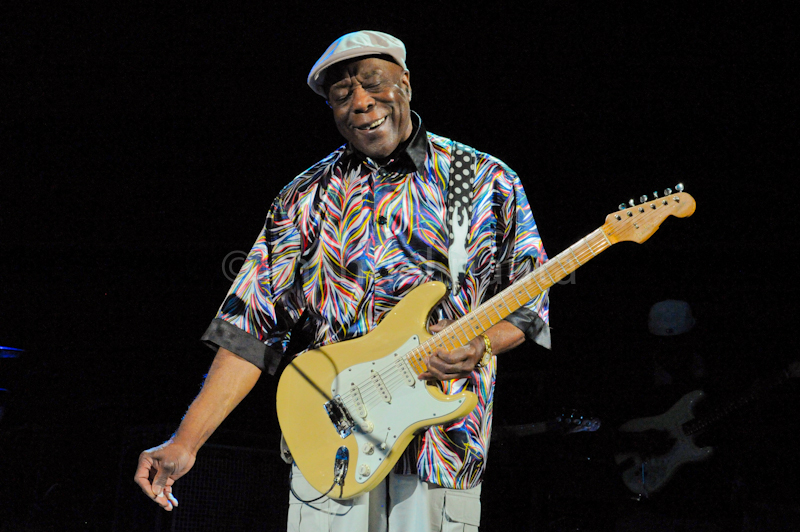 March 6, 2014 – San Antonio, Texas: Thursday night Living blues legend Buddy Guy performed at the historic Aztec Theater in San Antonio, Texas. The house was rocking from start to finish. First, Serbian born blues singer, guitar playing Ana Popovic took the stage at 8:00 pm to warm up the audience. This was more than a warm up for the main show. Ana is an amazing blues player who does not hold back. Dressed in a sort tight fitting dress wearing 3 inch red heals, she showed that this pretty girl knew how to rock the blues and squeeze out every note with vigor and passion from her Fender guitar.  If you get a chance, make sure to hear on the Experience Hendirx Tour.

At 9:15 pm Buddy Guy started his show to a rousing applause as he walked onto the stage wearing white cap, colorful shirt and some khaki cargo pants ironed to perfection. It is hard to say anything that has not already been said or written about this living blues legend. He is a six time Grammy Award winner, received the National Medal Of Arts, Kennedy Center Honors and is listed in the Rock And Roll Hall Of Fame.  Since The Aztec Theater is a medium size theater, the performances become very immediate and personal. And so it was tonight, Buddy being within arms reach of the fans standing up at the stage, did not seem to be this mega star that he in fact is, but just a great blues musician giving his all to the audience. Buddy Guy makes you smile as you listen to his blues, you can’t help but be taken in by the quintessential American art form that has shaped this country’s musical history.
.