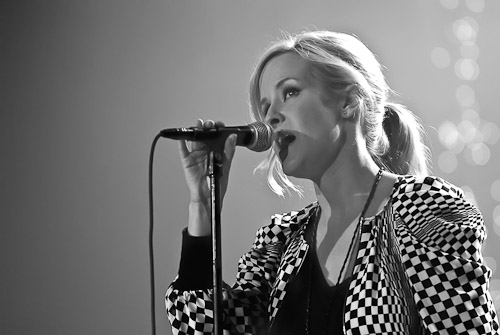 Austin’s most favorite singer and songwriter Bob Schneider paired up with Dixie Chick Martie McGuire for his soon-to-be-released DVD taping show at the Paramount Theater. It was a sold out show with a more mature audience than the usual high school and junior college girl-adoring crowd. Bob Schneider is an icon in the Austin music scene with his regular gig at the Saxon Pub, Antone’s and Threadgill’s. As usual, he performed a flawless set with memorable songs and his latest hit, “40 Dogs”!

Halfway through the show, he sang an amazing duet with Martie McGuire that caused the audience to sit in total silence. Of course, no Bob Schneider show would be unique without an audience member yelling out “sing a dirty song”, so also this time someone yelled out for a dirty song. Bob faithfully fulfilled the request and sang a whimsical dirty song while apologizing to his family that was in the audience. His usual band mates were amazing Harmoni Kelley on base, cool Jeff Plankenhorn on guitar, Conrad on drums and relentless entertainer Oliver Steck.