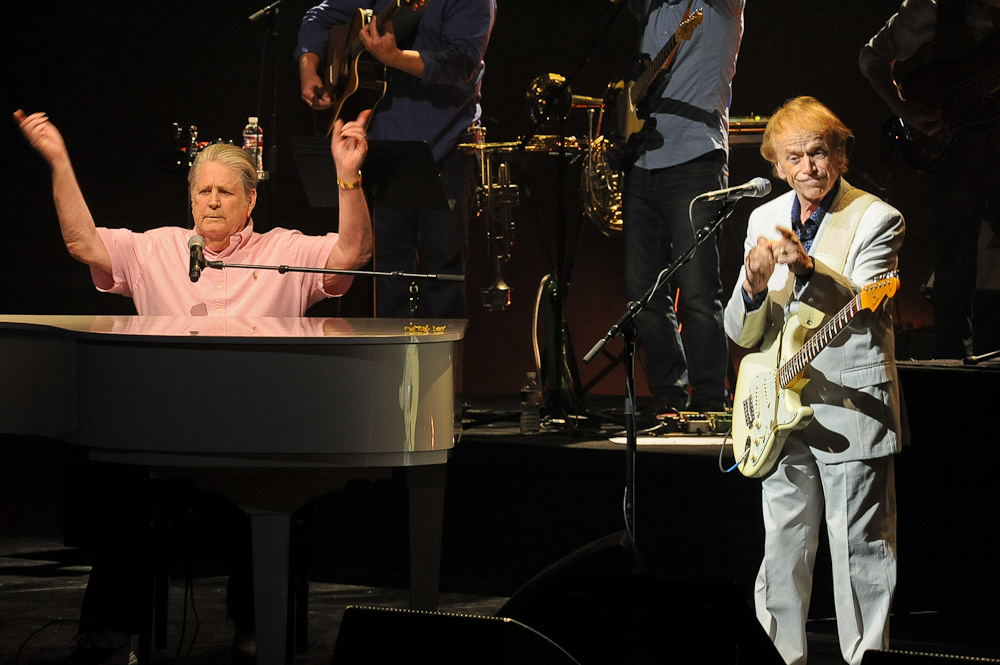 AUSTIN, TX – June 23, 2015 For half a century The Beach Boys have ebbed and flowed on the shores of pop culture relevancy and have done so in a myriad of ways. They were America’s homegrown pop sensations not named Elvis. Pet Sounds was ahead of its time and belatedly would be considered one of the greatest albums in rock history. Their songs have been used to move the plot in 80’s and 90’s cinematic and television works that haven’t aged well. And most recently the Brian Wilson biopic Love & Mercy, has revived interest in the embattled frontman and is already garnering Oscar buzz. However, on a tideless Tuesday in Austin, the only thing on the minds of the concertgoers at the Bass Concert Hall was the waves of sonic genius flowing from the art rock engineer.

Originally slated for the University of Texas’s Frank Erwin Center, the engagement shifted to the acoustically sound Bass Concert Hall. This made for a more intimate setting. Those in attendance donned outfits that ranged from oversized beach button-ups a la Wilson, machine-wash faded tour t-shirts and date-night, selfie-worthy garb. The median age was closer to 45 though both ends of the spectrum were represented. The drink options were glasses of vino from recognizable wineries and a regular Sophie’s Choice in regards to the Light beer offerings from Bud, Coors and Miller.

Wilson wasn’t the only performer on the bill with a theatrical piece of his life mentioned in Academy Award discussion. Poetic Detroit troubadour, Rodriguez, whose recent popularity burst is thanks to the Oscar-winning documentary about his enigmatic rise on South Africa the music charts in Searching For Sugarman, came out to rambunctious applause. Using no other metric other than my powers of sight and hearing, at least half the crowd was there for Rodriguez.

The man, the myth, the legend was practically an unknown in the states at the time of his creativity peak is experiencing peak exposure. His bluesy, flamenco style of prose-slinging was everclear and articulate, in the way you wish present-day Bob Dylan was live. His folk song sex appeal was on par with seductive wordsmith Leonard Cohen.  Rodriguez, to a lot of people myself included, is like discovering an aural amulet in your attic that you never knew existed.

Armed with just an acoustic-electric axe, Rodriguez churned out fine audio sculptures like “You’d Like To Admit It” and “Inner City Blues”. “Rich Folks Hoax” boasted lyrics that could have been penned today. “I Wonder” was an effervescent ditty with heavy pontification adornments. “Sugar Man” saw busy fingers and a desperation in the notes he delivered. Raw covers of Elton John’s “Your Song”, Jefferson Airplane’s “Don’t You Want Somebody To Love” and Ritchie Valens “La Bamba” closed out his crowd-pleasing set.

Armed only with his spellbinding fingers and gold plated pipes, Brian Wilson emerged from the shadows with an eleven piece musical calvary in tow (someone has to play the French horn, clarinet and sleigh bells right?) Blessing the crowd first was the new-aged Gregorian chant hymnal “Our Prayer”. “Heros and Villians” was a theatrical rhapsody that let the lighting sequences and Wilson’s wordless scatting abilities flex its muscles.

After a barrage of haymaker hooks, the vocal arrangements during the bridge and outro of “California Girls” was the perfect knockout punch to end the cards first round. We got a long way to go the distance and everyone seemed up to the challenge.

With founding Beach Boys member Al Jardine on lead vocals, “Shut Down” revved the crowds engines as a saxophone solo burned rubber. “Little Deuce Coupe” kept the motor running. Wilson’s eternal boyish charm danced in concert perfectly with his now grizzled timbre in “I Get Around”. Hip-shaking while still seated was a sensation that swept the theater.

“The Little Girl I Once Knew” saw the chronically motionless maestro animated on the piano bench. “The Whole World” was rife with lyrical depth and lush harmonies. In one of the few moments of banter, Jardine shared that this song was one of Wilson’s favorites because of the high production value. The number he was speaking to was “Then He Kissed Me”.

“California Saga” was a toe-tapping optimistic cut. “In My Room” was the first of a gaggle of couples-skate ballads. The collective longingness felt in the building was comforting. “Surfer Girl” had a beat in sync with the broken heartbeats of the onlookers. The melody was still haunting after all these years.

Matt Jardine delivered a pitch perfect performance during the vocal acrobatics of “Don’t Worry Baby”. Two of the newer offerings on the setlist happened to be the one’s infused with the most pathos and energy. Dedicated to his wife “One Kind Of Love” is the sincerest song Wilson has delivered in years. “Sail Away” was bombastic and inspired.

Blondie Chaplin brought rock to the forefront with “Wild Honey”. Chapman continued his crusade of guitar riffing and conquering on “Sail On Sailor”. The concert had entered a musical style showcase. The cuts so deep they severed arteries of even the die-hards. “She Knows Me Too Well”, “Wake The World”, “Busy Doing Nothing”, “Surf’s Up”, “The Right Time” and “Runaway Dancer” were lovely nutrient-fortified hors devours passed out before the savory main courses were served up.

“Wouldn’t It Be Nice” had the choir filling the vaulted ceilings with unadulterated bliss. “Sloop John B” not surprisingly and temporarily held the championship belt for crowd-favorite–which changed hands after each song until the curtain fell.

“God Only Knows”. Wow, “God Only Knows”. Songwriting craftsmanship at its finest. The point of this song is to escape in it, not talk about it, so I will oblige. “Good Vibrations” teased and tantalised until the chorus gave a full release of pleasure. The congregation stood on the feet for the first time and didn’t sit back down. Wilson’s voice now had a vibrato and moxie in it that wasn’t experienced earlier in the set.

After a brief encore and band introductions, the appropo “All Summer Long” vibrated the hall. During “Help Me, Rhonda”, the band merely served the backing track to the audience’s karaoke performance. “Barbara Ann” fatigued tongues, “Surfin USA” exhausted bodies and “Fun, Fun, Fun” raised spirits to the rafters. “Love & Mercy” was as beautiful as it was magical. Ending on an introspective note was brilliant.

In the spirit reflection, which the night was predicated on, on my way out of the Bass Concert Hall, I was struck by something down-right cathartic. Wishing revelers a goodnight as they exited was an esteemed usher who I caught singing along with the show as I made trips to the lobby for restroom breaks. She was grinning ear to ear while on the clock.

When you cover as many concerts as I’ve been ridiculously fortunate to do, the mundane little things stand out and start to matter. Is there enough dim light in the theater to write (yes in this case)? Is the music playing in the lobby incase I need to go to the water closet (again, yes)? And did the staff do such a good job that all you remember about the experience was that you connected with your favorite artist?
In this case the answer was yes, however the aforementioned usher did ping my concert observant sonar in a sense. Brian Wilson’s songwriting was so powerful that someone with timecard obligations, listening on a slightly muted PA system, could still be impacted enough to make them smile and feel good which is what Wilson’s life’s work has been all about.