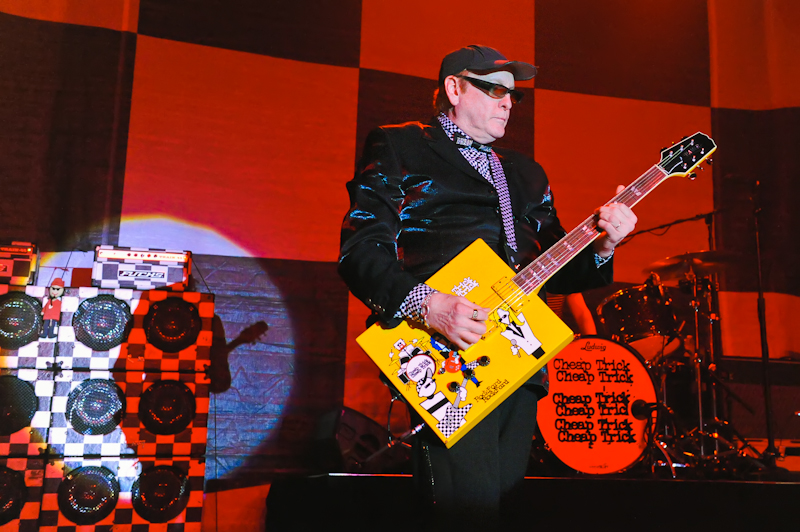 AUSTIN, TX – May 16, 2014 / The power-pop purveyors Cheap Trick continued their ceaseless, 40-year musical road trip with a stop at Emo’s in Austin Friday night, May 16th, in what was hook heavy and more show than tell.  Hailing from Rockford, Illinois (100 minutes away from my hometown of Chicago), Cheap Trick’s art is no longer up for debate, but their legacy still seems to be.

It’s difficult to triangulate their position on the Rock n’ Roll mountain of greatness.  They have the stats, their songs have been featured in film and television, they’ve sold 20 million albums, and three of their songs have been amongst top ten hits.  VH1 and Rolling Stone have even put them in some of the all-time greatest artist/albums lists, yet the Hall of Fame in Ohio has yet to hold an induction ceremony for these classic rock radio darlings.

On Friday night, the throng of CT followers was pretty equally comprised of both genders and ranged in age from 30 to 50.  The majority of the men wore machine-wash faded black concert tees, shorts with white socks, and black cross-training sneakers.  The fairer sex opted for groupie-esque tops with heavily embroidered and stitched denim.  Like any rock show in Austin, visible tattoos are a must, except the ink on this lot was more of the random placement, 80’s gas station clerk variety, instead of the usual Eastside, barista tat-sleeves.  The bartenders served libations from Austin Beerworks for most of the night.  The smoking patio was perpetually packed.  When I stepped outside to catch some fresh air, I inhaled a life’s worth of second-hand tar toxins and carcinogen exhaust fumes.

Austin’s psych rock-sludge metal trio Ume plugged in at 7:58 pm and stun-gunned the few hundred older-concertgoers who showed up for the 6 pm Cheap Trick pricey meet-and-greet.  I don’t think I’ve ever seen a large group of people with mortgages freeze like that since the great recession of ’08.  Lead guitarist-singer Lauren Langer Larson is at first-glance a blonde teddy bear in a faint blue baby doll blouse/dress.  As soon as pitch, vibration, and waves met, she became a West Texas Black Bear who freed herself from a trap you set and she’s not happy about it.

The guitar riffs pelt harder than a paintball shot from a .68 caliber rifle on exposed skin, her vocals turn your bones into quicksand leaving your organs shit out of luck, and Langer’s stage presence is something that Cosmos’ astrophysicist Neil deGrasse Tyson needs to explain to me.  After a few songs, the crowd shed their shell shock and came to their senses by getting into the rest of the 30-minute set.  I recommend you Spotify tracks like “Black Stone,” “Rubicon,” and “Reason” — but more importantly, catch Ume before they get too big for Austin’s city limits.

When a few a cappella bars of “California Man” filled the concert hall, I wondered why Zander wasn’t more of a household name.  If a sing-off was ever held with him and his contemporaries like Steven Tyler, Roger Daltrey, and Jeff Lynne, I’d put my money on Zander — partly because he’d payout better if he pulled the upset.  Tangent aside, Zander may not have the octave like the others, but he can no doubt hold his own.

Bassist Tom Petersson has the most dexterity of those on stage, which he displayed as he bandied bass scales during “One Top of the World.”  The track was constructed like an ELO tune, but with made-in-America solos, and thick harmonies.  The spotlights then turned their attention to the drum fills of Daxx Nielsen, who is Rick’s kid, and has the four-year-old oxymoronic title of Bun E Carlos “fill-in fixture”.  “Ain’t That A Shame” featured a guitar vs. bass, call and response moment, where the vocals ultimately won.

The group unveiled a new song, but not before asking the audience — half jokingly — to not film it because they might mess it up.  The tentative title is “Bang Zoom…” Nielsen said that the song was about drinking after years of sobriety. With the oft-repeating chorus of “So good to see ya again,” you realize lyrics aren’t usually the most important thing to semi-retired songwriters.

“Need Your Love” was lurking behind the shadows of 80’s glam rock and was as deranged as it was epic.  The bridge felt important for the band to play and we were all glad they did.  Next came the understated “Borderline,” but the performance was over-delivered.

Upper-bodies swayed at a frenzied pace during “The House Is Rockin’.”  Oldie, but goodie, “Oh Candy” was sweet but with the same aural nourishment as sonic quinoa.  Nielsen took to the mic to proclaim, “Every time you watch That 70’s Show, you hear Cheap Trick doing the theme song,” and went into “In The Streets.”  Any one familiar with that aria’s creators, Big Star, probably shook their head at the chronic negligence of credit that was due to Big Star.

“Southern Girls” had those with XX chromosomes hooting and hollering.  Enter Martie Maguire from the Dixie Chicks for the acoustic and sole number one hit for CT, “The Flame.”  Maguire brought a delicate yet dynamic element to the uber-80’s power ballad.

It was Petersson’s time to shine as he fronted “I Know What I Want.”  His drawl conjured up Country-era Jagger.  “I Want You To Want Me” was the first, and possibly only visceral moment of the entire show.  Partners kissing and iPhones filming is all anyone could see in any direction.  “Sick Man” was a bit abrasive and would have made more sense at the top of the set.  “Dream Police” had everyone fist and finger bumping.

“Never Had a Lot to Lose” kicked off the encore.  Hands down, the most seismic response of the night was for “Surrender.”  The sound guy might as well have turned off the speakers — we got this.  Closing out the set was the thematically redundant “Auf Wiedersehen” and “Goodnight.”

All in all, I was probably one of a handful of onlookers that was mildly disappointed.  Cheap Trick played all the hits, but when you see a band that’s seen as much as they have, you lust for more than an a pixie-sticks worth of self-deprecating anecdotes and sing-alongs. You want a night that’s unforgettable.

In the past four months I’ve covered the concerts of Hall of Fame rock acts (Hall and Oates, Blondie, The Beach Boys) that, in their advanced age, gave me memories that might end up outliving them.

If you want to see a textbook amazing rock show, I implore you to see Cheap Trick the next time they undoubtedly return to Texas.  You get what you pay for with them — nothing more, nothing less.