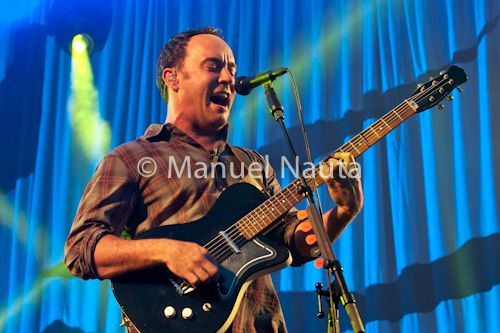 Wednesday May 22, 2013 – Dave Matthews Band played at the Austin 360 Amphitheater on the grounds of the Circuit of The Americas race track. The show was delayed one day due to inclement weather warnings the day before. These warnings were taking very seriously because just two days earlier there was the incredible destructive tornado in Moore Oklahoma.

However, this Wednesday was a beautiful night with a great sunset visible all over the amphitheater. As the curtain dropped around 8:30 pm, Dave Matthews started the show off with So Right and kept on rocking until at least 10:30 pm. You can see the set list in the photo gallery below. No breaks or much small talk, just great music, song after song. As always, Dave places a great emphasis on the rhythms, and you won’t here many guitar solos.  Dave Matthews songs seem to tell stories carefully layered on energetic beats that keep the audience on their feet dancing all night long.