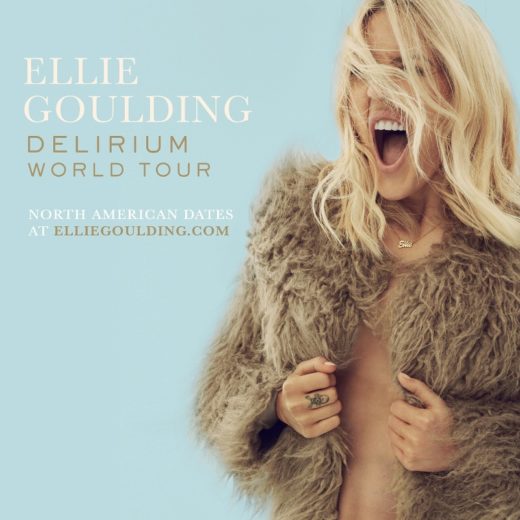 SANTA MONICA, Calif., Nov. 2, 2015 / — Ellie Goulding announces dates for the North American leg of her Delirium World Tour, which kicks off on April 1st, 2016, in Vancouver and crisscrosses the continent through the end of June when it wraps up with a show at New York City’s Madison Square Garden. Pre-sale is underway on Tuesday, November 3rd at elliegoulding.com and tickets for the general public go on sale starting Friday, November 6th. American Express® Card Members can purchase tickets in select markets before the general public beginning Monday, November 2nd at 10am through Thursday, November 5th at 10 pm. London-based electronic pop trio Years & Years will join Goulding on select dates.

Goulding will be touring in support of her third studio album Delirium, which will be released on November 6th via Cherrytree/Interscope Records. The album is currently available for pre-order and those who do will receive instant downloads: the first single “On My Mind,” “Something In The Way You Move,” “Lost and Found” and “Army.” Produced by Max Martin, “On My Mind” is Top 10 at Top 40 radio. Meanwhile the video — a high-octane revenge thriller filmed in Las Vegas and directed by Emil Nava — has racked up more than 46 million views on Vevo. Watch it here.

It has been a whirlwind few years for the singer from Herefordshire, England.  Since the release of her debut Lights in 2010 and Halcyon in 2012, she has sold over six million albums and 20 million singles worldwide, scored six consecutive platinum US singles, won two Brit Awards, and has video views and streams both in excess of one billion. This year’s “Love Me Like You Do” single, meanwhile, was a worldwide No. 1 smash, hitting the top spot in 70 countries and breaking the record for the most streamed song in one week.