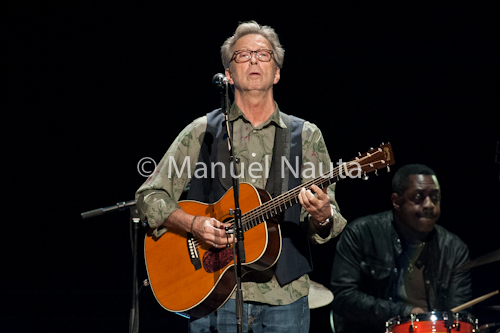 Saturday night March 16, 2013 living guitar legend Eric Clapton performed at the Toyota Center in Houston Texas during his Old Sock tour. The Wallflowers with frontman Jakob Dylan opened the show. I am huge fan of both Clapton and The Wallfowers, however, to me it became quickly clear that the Toyota Center might have been to large a venue for this concert.

I was standing near the soundboard in the center of the arena and the sound fizzled out loosing definition and punch. Jakob Dylan performed virtually monition less which added to a less than exciting performance. A smaller venue would have showcased the wonderful melodies and riffs The Wallflowers produce but at least for me, at such a distance into the venue, the music and performance became very one dimensional and lackluster. Who knows, maybe another sound engineer would have been able to fix this.

Next up “Slowhand” Eric Clapton walked on stage, the audience seemed in awe as the applause slowly started. He picked up his acoustic guitar and started off with “Hello Old Friend” from the 1976 album “No Reason To Cry.” This was followed by “My Father’s Eyes” first released as a single in 1998. Time was up for me as photographer and I left the building.