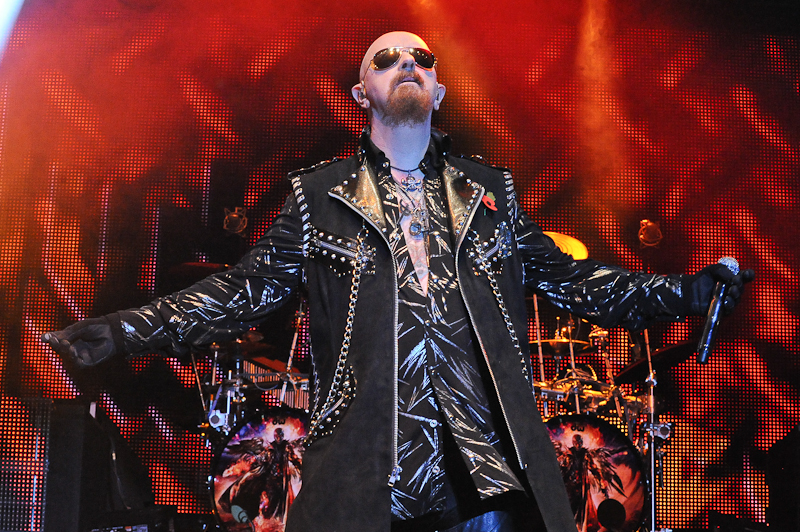 AUSTIN, TX – November 7, 2014: The cool festival was experiencing cooler 50 degree temps, but bursts of hot energy were upon us. To FFFFest’s credit, there was always music to be enjoyed at any one time–which made a lot of people forgo the long lines to grab dinner and thus, served as a recipe for disaster in the case of the indulgent lot (re: everyone).  However, for the last hour of the show, all the headliners played concurrently.  Genre wise, they were all disparate enough as to ease the segregation, but to the few that wanted to see all three, this was a bit problematic.

First up on my agenda was legendary (there’s not a modicum of hyperbole here) metal act Judas Priest, which lead singer Rob Halford reminded Austin that this was their 40 year anniversary of being a band.  After a fake out snippet of “War Pigs” and “Battle Cry” played through the loudspeakers, the logo-ed curtain with their name on it dropped and the band went into the new cut “Dragonaut.”  Halford’s metal vibrato is sharp as a samurai sword kept in a museum and is liable to cut you by just staring at it.

“Metal Gods” off 1980’s British Steel garnered a huge reaction as the drubbing bass and whiplash licks kindled the crowd’s fervor and fire for JP.  In “Devil’s Child,” it’s almost jarring how pristine and articulate the vocals are.  Anytime you see modern day metal, you use a lip reading manual and word-deciphering software just to enjoy the vague symbolic lyrics.  The multi-decade spanning group was a breath of fresh air. After a rousing rendition of “Victim of Changes,” I made my way towards band of the moment (not in the pejorative sense, but meant in the figurative/literal way), Alt J.

With a simplistic but effective light setup, stepping out from the red illuminate, Alt J went into the delicate and hypnotic (think Radiohead early 2000’s) “Hunger of the Pine.”  The backing track of “I’m a female rebel” brought consciousness to a night where losing consciousness was the point.  The wordless melody intro from the band’s biggest hit “Fitzpleasure” built anticipation, and the first dub-steppy synth note expelled all stored wattage.

The subdued complex arrangements, handclaps inducing and caramel thick harmonies in “Something Good” shows the band’s tunesmith chops and a future that is limitless.  Taking care of the “Dissolve Me” was a toe-tapping optimistic ditty that also served as my exit music.  As I careened through the sea of onlookers, I noticed more music writers furiously writing notes than I could count, so I figured they all could cover me when it came to the hippest band on earth.

In the rap game, when your name is your catchphrase, you’re doing something right.  The haberdashery aficionado, 2 Chainz is a towering figure on stage, but his stage presence looms larger.

“So much money it won’t even fold.”  Regardless of the crowd being able to relate to this 2 Chainz lyric in the joint “Fork,” his fans were living vicariously through him.  2 Chainz then went into his Drake collaboration “All Me.” The “Spend It” hook was endless and anathematic.

Mortality was what caused me to leave 2 Chainz on a high note.  This may have been the only chance I would have to see Judas Priest’s “Breaking The Law.”  There was a pleasant surprise in the form of new song “Redeemer of Souls.” Many of the older acts phone in new works as a cash grabbing reason to go on tour. This was not the case as the song was textured and wrought with creativity and steel. After a scorching rendition of “Jawbreaker,” their catalogue’s centerpiece was upon us.  Those with mobile phones with processing power to shoot video recorded “Breaking The Law,” while others went out on a limb, closed their eyes, and were arrested by what they heard.

Day one was in the books, shoes were caked with mud, exposed skin was refrigerated, and with a good buzz still going, FFFFest successfully delivered on its namesake.