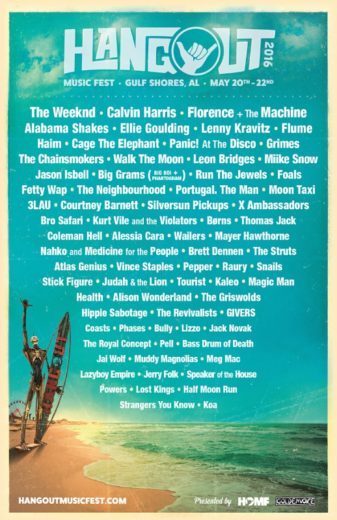 The Hangout Music Festival is located in Gulf Shores, Alabama – just a few miles from the Florida border. The Gulf Shores area offers a variety of vacation rentals including condos, hotels and beach houses – many of which are located within walking or biking distance to the festival. Fans looking to book a place to stay for the festival can choose from a wide selection at www.hangoutmusicfest.com.

The Hangout Music Festival has been recognized as one of the premiere live music events in the United States with a beach setting that is part music festival and part dream vacation. The festival is located on the white sandy beaches of Gulf Shores, AL – just a short drive from the Pensacola FL and Mobile AL airports. Each year at the Hangout Festival, fans are treated to some of the biggest names in music alongside new emerging acts. The Hangout Music Festival was recognized by Pollstar as the “Music Festival of the Year” in 2011 and was named as one of the best festivals of 2013 by Paste Magazine. The 2014 festival sold-out with a record setting attendance and infused over $31 million into the local economies of Gulf Shores and surrounding areas.