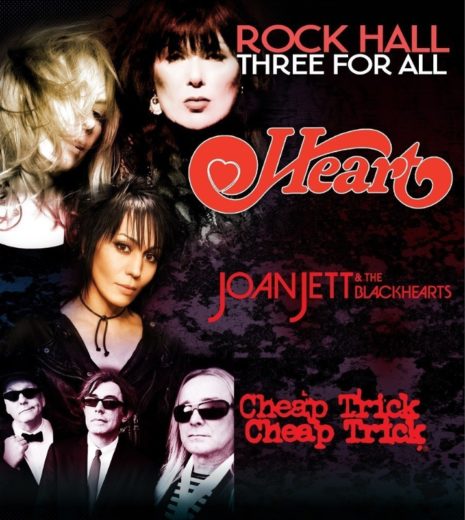 LOS ANGELES, Jan. 14, 2016 / — Three of rock music’s most iconic bands will hit the road together this summer on The Rock Hall Three For All Featuring Heart, Joan Jett & The Blackhearts and Cheap Trick. Produced by Live Nation, the tour will kick off on Thursday, July 14 at DTE Energy Music Theater in Clarkston, Mich. as the bands embark on a 30+ date trek across the United States with shows lined up in Los Angeles, Chicago, San Francisco, Dallas, Nashville and more.

Rock & Roll Hall of Fame inductees Ann and Nancy Wilson first showed the world that women can rock when their band, Heart, stormed the charts in the ’70’s with hits like “Crazy on You,” “Magic Man,” “Barracuda,” “Straight On,” and so many more.  Not only did the Wilson sisters lead the band, they wrote the songs and played the instruments too, making them the first women in rock to do so.  Heart continued topping the charts through the ’80’s and ’90’s with huge hits like “These Dreams,” “Alone,” “What About Love,” “If Looks Could Kill,” “Never,” and a string of other hits that showcased the sisters’ enormous talents as musicians, singers and songwriters. Along the way, music by Ann and Nancy Wilson and their band Heart sold more than 35 million albums, sold out arenas worldwide, and found their way into the soundtrack of American life through radio, motion pictures, television, and associations with branded sponsors. Powerful and exciting on stage, Heart performs their amazing show to many hundreds of thousands of fans annually.

Joan Jett is an originator, an innovator, and a visionary. As the leader of the hard-rocking Blackhearts, with whom she has become a Rock & Roll Hall of Fame inductee, she’s had eight platinum and gold albums and nine Top 40 singles, including the classics “Bad Reputation,” “I Love Rock ‘N’ Roll,” “I Hate Myself For Loving You,” and “Crimson and Clover.” She sits at the head of her own independent label, Blackheart Records. Jett has acted in movies and television, including 1987’s “Light Of Day,” and in a Tony-nominated Broadway musical, “The Rocky Horror Show.” She has appeared on such acclaimed television shows as “Oprah” (the last season) and ‘Law and Order.” Jett and the Blackhearts released their latest record, “Unvarnished,” last year and continue touring the globe to throngs of adoring fans. “Unvarnished” debuted in the Top 50 on the Billboard 200 chart.

With over 5,000 performances spanning four decades and 20 million records sold worldwide, Cheap Trick is undoubtedly one of the most influential classic rock groups of the past 50 years. The band was formed in 1974 and while it has evolved throughout the years, Cheap Trick has continued to reach mainstream and critical success. Hits such as “I Want You To Want Me,” “Dream Police,” and “Surrender” have cemented the group as one of America’s top rock ‘n’ roll bands of all time. Cheap Trick will be inducted into the Rock & Roll Hall of Fame this April.

ROCK HALL THREE FOR ALL FEATURING HEART, JOAN JETT & THE BLACKHEARTS AND CHEAP TRICK
*All dates, cities and venues below subject to change.

* – Cheap Trick will not perform on this date.