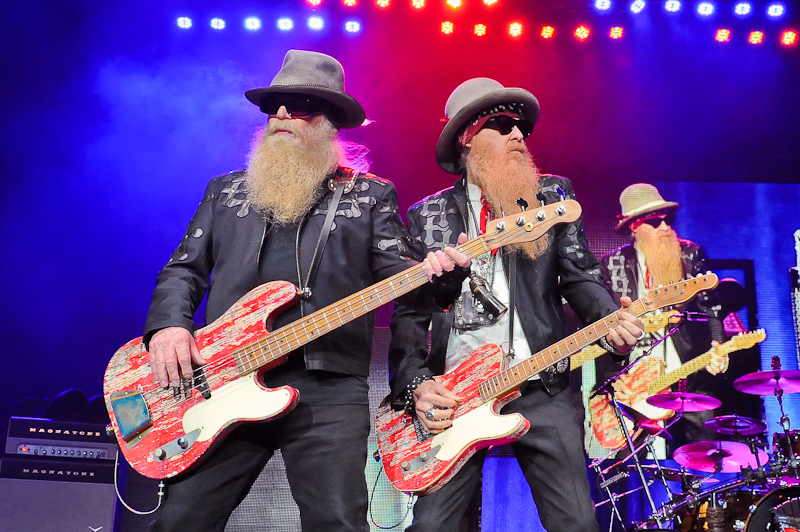 Not surprisingly, the packed parking lot yielded snaking lines of middle-aged classic rock aficionados who were eager to welcome ZZ Top back to their home state. Holding draft beers as big as Billy Gibbons’ and Dusty Hill’s beards, this crowd immediately hustled in and prepped for a party. The honey barbeque wafting through the concessions stand perfectly punctuated the all-American atmosphere taking over the venue.

With over 8,000 seats, The Cedar Park Center hosts events as diverse as rodeos, high school graduations, ice spectaculars, and sporting events. Nearly every cup holder in arena clutched some sort of alcoholic beverage. Despite the distance between the stage and seats, the acoustics rang clearly and precisely for opener Tyler Bryant, a 24 year old garage grunge rocker with impressive locks of wavy hair. His acoustic guitar played like an electric, with reverberating rhythms and a rich, full tone.

After a few polite pushes and shoves to the bathrooms, the crowd migrated back to their plush chairs in time for the Jeff Beck logo to appear behind the stage. Beck’s first apreggiation across the strings halted the air throughout the venue. His instrument wailed and crooned and sang like a passionate cabaret performer. After opening with “Loaded,” he launched in to the instrumental tracks “Nine,” and “You Know You Know.” Beck required no other explanation. His presence dictated the flow of his set, and did not to fill the space with unnecessary banter.

While floating his feathery fingers along the neck of his guitar, he strolled across the stage as though The Cedar Park Center was merely a grassy lawn. His bassist, Rhonda Smith, strutted forward in spike black heels, and with a power stance, glided her hand along the strings. She could taste, smell, and viscerally feel each note she played.

Vocalist Jimmy Hall’s pipes soared on “Morning Dew.” This Bonnie Dobson cover warmed up the listeners for the moving Sam Cook classic “A Change is Gonna Come.” Hall’s tongue nearly escaped his mouth as the notes fell out in an effortless stream of pure emotion. The set started groovin’ again with a cover of Stevie Wonder’s “Superstition.” This familiar tune then escalated into a pulse-quickening “Big Block” and The Beatles’ “A Day in the Life.”

Not long afterward, the men with the famous sunglasses, beards, and hats cruised on stage. For over four decades ZZ Top has written head-bobbing rock music and toured with the same three members: singer/guitarist Billy Gibbons, singer/bassist Dusty Hill, and drummer Frank Beard. Most of the fans sitting floor level have played their air guitar to the trio’s opening song “Got Me Under Pressure” since its inception in 1983. The original “Gimme All Your Lovin'” music video streamed behind Beard’s extravagant drum set throughout this iconic ZZ Top hit. Fathers proudly patted their sons on the back, eager to introduce them to the sounds from their teenage days.

Gibbons’ signature gutsy voice sounded full of gravel and bones as he wailed on “I Gotsta Get Paid.” After a psychedelic “Flying High,” the band segued into familiar cover songs. While relishing in the chugging groove of Jimmy Hendrix’s “Foxey Lady,” Gibbons threw out his hand to the crowd and invited them to sputter out the song’s title. ZZ Top’s rendition of Muddy Waters’ “Still a Fool” melted into a warm, gooey concoction of delicious blues.

The swirling atmosphere continued with “Cheap Sunglasses” as a visual display of spinning eyes and cool shades morphed into different shapes behind the band. Within the first measure of “Sharp Dressed Man,” arms reached for the ceiling and began shimmying. Men and women kicked their feet and chugged their beer as they screamed out the honest truth: “Every girl’s crazy for a sharp dressed man.” After the ruckus calmed down, two furry, white guitars materialized onto the stage. Complete with rehearsed choreography of sways and grapevines, Hill and Gibbons brought the 80s back with “Legs.”

The beards waved and exited the stage, but they weren’t fooling anyone. The two minute break before the encore allowed the group just enough time to change into their bedazzled black leather jackets. The crowd’s howling cheers and whistles softened when Gibbons started speaking. For the past four decades it’s been “the same three chords and the same three guys,” but for the next song they added one more musician.

Jeff Beck traipsed on the stage, this time ditching his jacket for a loose and comfortable getup. “Rough Boy” and the Merle Travis’ “Sixteen Tons” cover left the audience hypnotized. The trance was lifted when Jeff Beck returned backstage and ZZ Top woke everyone up with “La Grange.” Of course, they couldn’t end the evening without playing the song that stirred excitement on radio stations all week. Finishing strong with “Tush,” ZZ Top took a theatrical bow and left the audience with all of their rock-and-roll lovin’.