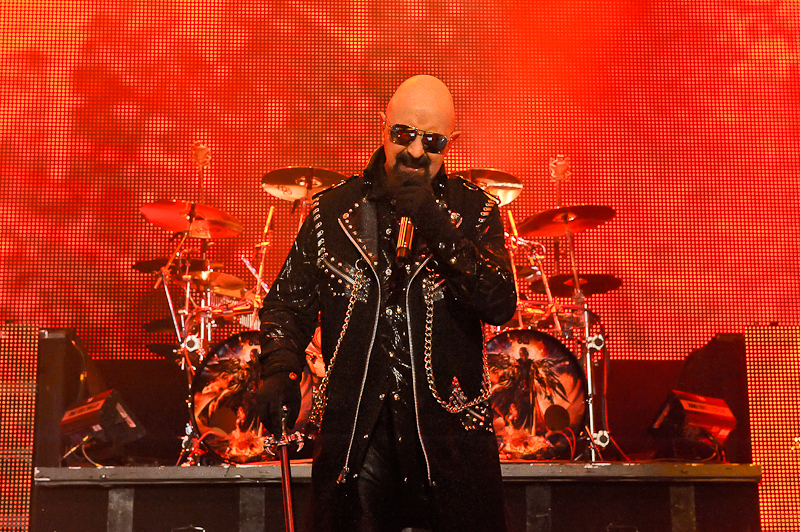 CEDAR PARK, May 14, 2015 With tailgates popped down, beer cans fizzing open, and car stereos blaring, the parking lot at the Cedar Park Center vaguely resembled the pregame festivities for a UT home game. If there was any confusion about March 14th’s anticipated event, the sea of black, cutoff T-shirts and leather jackets smeared it away. That’s right. Judas Priest was taking over, and this wasn’t the first time this crowd had experienced the band’s tidal wave of flesh-melting metal. Logos from every album spanning from “Sin After Sin” all the way to “Redeemer of Souls” were splattered across the chests of men and women throwing back a cheap cold one outside of the arena.

Not surprisingly, the line at the merch table slithered past the concession stands. The concertgoers buzzed with adrenaline as they forked over forty bucks for the next shirt to add to their collection. They trickled in lackadaisically as the opening band, Texas Hippie Coalition, stormed on stage. Singer James “Big Dad Ritch” Anderson demanded a more captive audience. With vocals ablazin,’ he bellowed the opening lyrics of “Hands Up,” and the crowd obeyed without question. These outlaws took no prisoners, and they soon lassoed the rest of the meandering crowd to their concert.

Bassist John Exall’s mop of blonde hair never stopped catching the light. With his clenched fist proudly punching the air, he marched across the stage and challenged guitarist Cord Pool to a duel during “Fire in the Hole.” As grimy, greasy strings howled against Timmy Braun’s animalistic pounding on the drums, the crowd could see there would be no clear winner. Big Dad Ritch cocked the barrel on the shotgun microphone and corralled the trio back into his gang of villains. As Exall and Pool took a water break, Big Dad recalled childhood anecdotes. Don’t think Mr. Ritch got sentimental on us, though. No, this man made sure everyone knew that even back in the day, that six foot tall, 300 pound fourth grader could “whoop your ass.”

After a few mild threats, THC shot in to “Outlaw.” By this time, everyone with two hands had thrown them up in the air. Big Dad Ritch commanded each person in The Cedar Park Center to come to the next Hippie Coalition show. If he doesn’t see you there, he said he will wait by the entrance of Wal-Mart and personally dig your grave.

The space between metal fans shrunk with each passing minute before Judas Priest’s set. Limbs hung over the edge of the pit, and security guards heightened their game. Even the house music of Kiss, ZZ Top, and Iron Maiden got the revelers’ blood pumping hotter. When Priest blazed on the stage, a volcanic eruption of piercing cheers poured out. Singer Rob Halford, bassist Ian Hill, drummer Scott Travis, and guitarists Glenn Tipton and Richie Faulkner opened with “Dragonaut,” the first track off of their 2014 release “Redeemer of Souls.” In true face-melting fashion, the legendary five-piece band drenched the crowd in a downpour of heart pounding metal.

Priest catapulted in to “Metal Gods,” not letting the energy drop for even a millisecond. Halford scorched the stage as he exited through the left wing, smoke coming off his heels. Tipton and Faulkner wailed on the opening chords of “Devil’s Child,” and Halford screamed the opening “hypnotize me/ mesmerize me” from behind the curtain. With new, silver trench coat draping his back, Halford once again graced the stage like the rough-edged royalty he is.

“Victim of Changes,” a track from the 1976 record Sad Wings of Destiny, followed. Scott Travis launched his drumsticks in the air, letting the wood spin several times before coming back to his hand. The rockers then came back to the Redeemer of Souls album for “Halls of Valhalla.” Red, bloody waves crashed on the screen behind them, carrying the audience into a deeper flood of emotion.

A swirling tornado of people landed near the back of the floor section. Men with torn denim shorts, green hair, and pierced eyebrows threw and pushed and forcibly flailed their bodies against each other during “March of the Damned.” An occasional high five and encouraging nudge brought another member into the fold, and the cyclone of rapture continued. By the time Priest came to “Turbo Lover,” the storm had multiplied and captured even more fans cathartically punching to the pulse of the drums.

“Beyond the Realms of Death” brought a change of pace to the rowdy set list. Saying that every metal show needs a ballad, Halford conducted the band to begin while he once again changed jackets off stage. After launching in to “Breaking the Law,” Halford roared in on a motorcycle for “Hell Bent For Leather.” His whip and serrated black hat remained for the final cascade of hits: “Electric Eye,” “Another Thing Comin’,” and “Painkiller.” Halford brought the mic to the audience and asked what we wanted to hear. A unanimous scream of “Living After Midnight” echoed across the stadium and, giving us what we wanted, Judas Priest closed the show with their most iconic song.