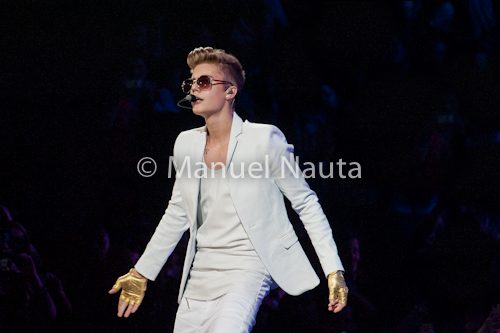 January 12, 2013 – Justin Bieber brought the “Believe” tour 2012 to a sold out AT&T Center in San Antonio, Texas. Sadly enough the long lines of fans carrying their home made signs expressing their love and adoration for the Bieber had to hand over their signs before entering the venue. Some fans just showed up without a ticket so they could just be near the building where the concert was. The first opening act was the very young Australian pop singer Cody Simpson. Following Cody was Carly Rae Jepsen, known for her song “Call Me Maybe.” To an eardrum popping mass scream, the Justin count down clock starting ticking away on the gigantic screen above the stage. Then exactly ten minutes later, the screen parts in the middle as Bieber descends dressed up in white with a set of enormous wings attached to his back. Maybe he is a bit young to have a God complex, but he sure made a statement with this grandiose Biblical entrance. Sad to say that I don’t recall a single song from the show but I will never forget this entrance. It is a top class show with pyrotechnics, nice stage sets, great lighting and lots of pop music that will entertain your pre-teen kids. Now we will just have to wait and see if the fans will still follow him as he enters his twenties.