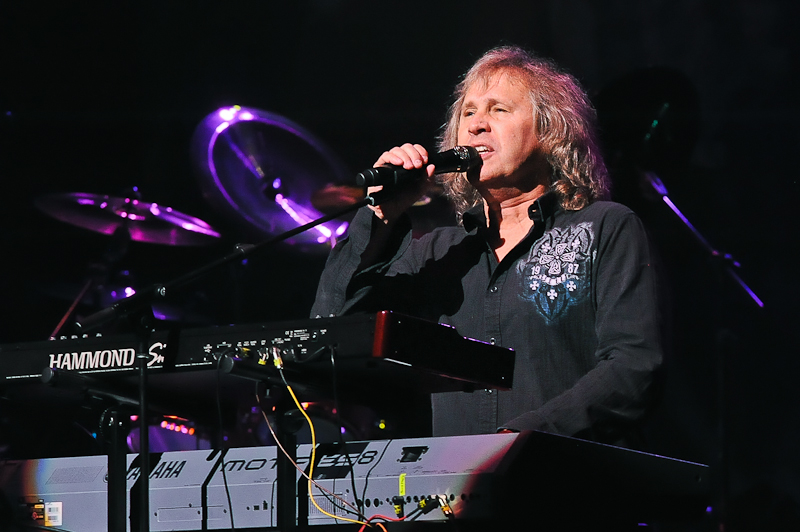 AUSTIN, TX – August 20, 2015 Overlooking the foggy Austin skyline, The Long Center welcomed classic rock legends Kansas to The Live Music Capital on Thursday night. Ticket holders temporarily packed away their Texas pride and turned their attention to 1970s Topeka, where a humble garage band shocked earlobes and paved the way for a new sound in music.

Dell Hall, host of countless Ballet Austin performances and Broadway national tours, got a twinge of the rock ‘n roll bug, but the shredding violins and punching drums didn’t halt any of this venue’s elegance. The crisp air conditioning offered a refreshing reprieve from the sticky outdoor humidity. Ushers in black dress pants pointed their mini flashlights towards seats, and programs replaced beer cans as the audience weaved their way through the aisles.

As backs sank in to their comfortable seats, the stage lights theatrically burst through the theater. Cell phones instinctively fled into pockets, fearing the bright screen might distract from the spectacle. The opening chords of “People of the South Wind” signaled a symphony of aural transfixion, and the sound quality never wavered.

Though only two of the band’s original members remain, Kansas sounds as vibrant as ever. Guitarist Richard Williams and drummer Phil Ehart have shared the band’s rich history from its inception, but keyboardist David Manion and lead singer Ronnie Platt are relatively new. Joining the band in 2014, Manion and Platt stay true to Kansas’ musical intentions while adding their own flair to the mix. With bassist Billy Greer and violinist David Ragsdale rounding out the six-piece group, Kansas blared their force of sound through The Long Center.

The rock radio favorite “Point of Know Return” shocked listeners out of their initial awe, and inspired some quiet lyric-mouthing. Platt’s gorgeously trained vocals may have hypnotized the crowd, because even this epicly singable track had listeners glued to their chairs. No, this wasn’t your typical 1970s head-banging spree of cathartic emotion; this was art. The patrons soaked up the delicate balance of keys, guitars, and bass like they would a priceless painting at the Blanton Museum. The evening resembled a rock opera rather than a rock concert.

“Play the Game Tonight,” from Kansas’ “Vinyl Confessions” album, washed another wave of sonic synchronicity over the audience. Manion’s keyboard solo trickled like rain and seamlessly transitioned into “The Wall.”

Greer ordered a break to the cascade of delicious harmony and shook things up with a little country and western action. Their southern roots shined through in “Reason to be” as Williams swapped his electric guitar for an acoustic and strummed relaxed, effortless chords.

The much-anticipated “Dust in the Wind” followed and signaled the cellphones out of hiding. Instead of distracting from the pristine performance surrounding them, the phones illuminated the theatre like Zippo lighters would have in 1977. Surprisingly, the light added to the aesthetic and made the theater feel more intimate.

Revving up the engine, Kansas blared with “Miracles Out of Nowhere.” Greer shared the vocals with Platt, trading off between round, booming bass notes and stratospheric wailing. Ragsdale basked in the crossing beams of light as his violin sang on “Closet Chronicles.”

Paying homage to Kansas’ self-titled 1974 album, the backdrop artwork crept in to view during “Belexes.” The triumphant giant that graced their first album cover basked in the band’s success, remembering the young boys from Topeka who unknowingly crafted a new kind of music over 40 years ago.

“Sparks of the Tempest” nearly blinded the auditorium with stark flashes of light, but once Greer kicked in with his grooving bass pulse, the audience settled back into their captivated reverie.

After “Sparks Of The Tempest,” the musicians lined the edge of the stage and soaked up the applause in true curtain call style. Following an encore set of “Fight Fire with Fire,” the most anticipated song of the night nearly snuck up on everyone. The long-awaited three-part harmonies burst through, and power fists reached for the ceiling. “Carry On Wayward Son” remained refreshingly loyal to the recording, and only varied to show off Platt’s muscular vocals.

Classic rock concerts often rely on pure nostalgia to carry the show. Fans at The Long Center, however, were greeted with a perfect mixture of history and sound.

Despite the crowd’s lethargic energy, the evening’s focal point remained on the music. Through all of his vocal pyrotechnics, Platt never showed signs of fatigue. Each musician’s volcano of talent and artistry created a stew of rich, complex flavors.

Even through their shifts and changes, Kansas stays true to their music. It’s easy to take their revolutionary sound for granted when radio stations pour out new musical genres every day, but Kansas was a trailblazer. After this show, even the handful of millennials could understand how they paved the way for rock music.