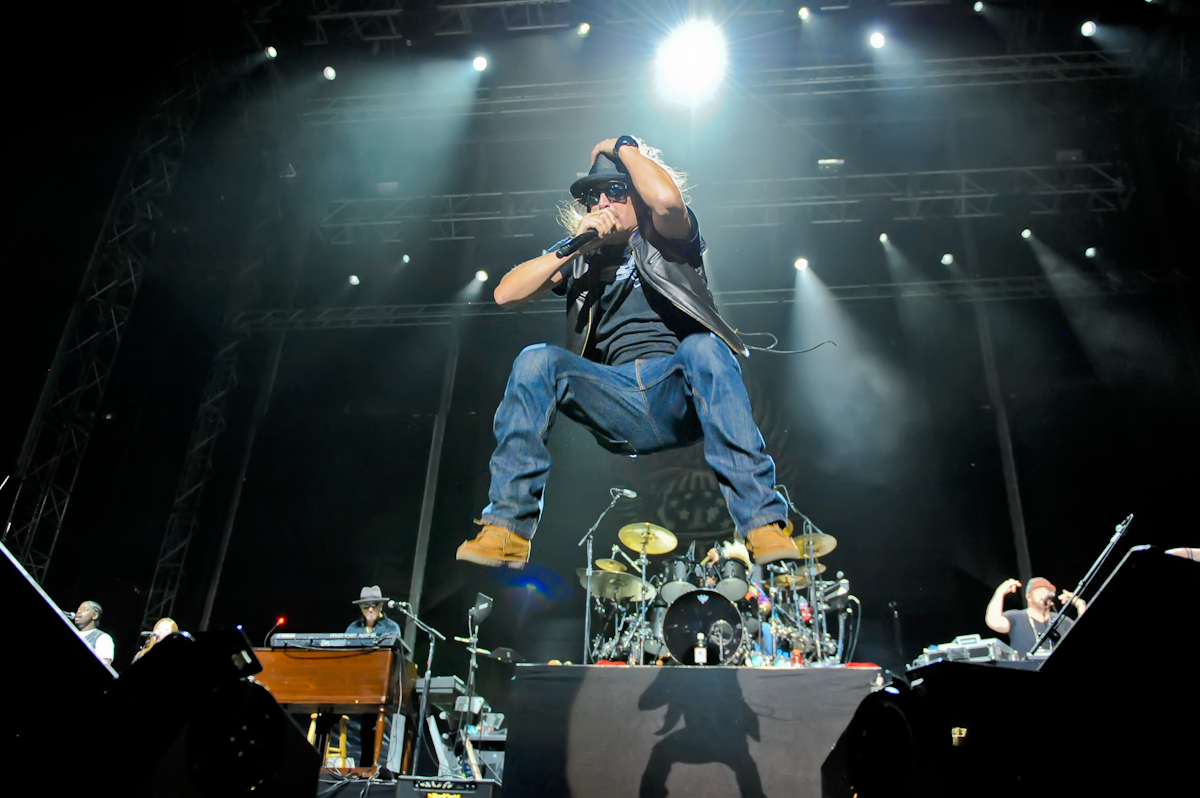 SAN ANTONIO, TX – May 24, 2014: With 23,000 people in attendance, the River City Rockfest felt just as packed as the Riverwalk on the  Fourth of July—minus all the families still chlorine coated from a day trip to Schlitterbahn of course.

The rainfall finally got its act together, the humidity started to lay it on thick, as we continue through this one helluva bill with Italian goth-metal act Lacuna Coil.  The band is entering it’s second decade of existence, and their vampiric sound/appearance is not for those who enjoy young adult fiction series about vampires.  Male/female dueling dual-vocals Andrea Ferro, and Cristina Scabbia are in their 40’s but don’t look a day over immortal.

The ominous and dynamic “Trip The Darkness” has a sound song structure.  The verse-pre chours-chours and bridge parts are all self-contained relics. “Die & Rise” off their new record Broken Crown Halo, was just the kind of industrial-dance-metal workout that used muscle groups not utilized in fist-bumping and head-banging. I then haphazardly eavesdropped onto a conversation between a tween and her dad. The father-daughter duo threw the rock horn hand gestures in tandem as the motivated papa said “see, girls can rock just good”, her eyes gleaned inspiration and said “cool”.  As un-metal as this moment was, it was one of a few humanizing instances of an otherwise surface-level Saturday.

The only other female-fronted act, played during the same time as Lacuna Coil.  I was not a fan of this scheduling conflict, but I haven’t the foggiest of what goes into producing a rock fest, so I will give everyone involved the benefit of the doubt.  Cue the NSFW (or in real life for that matter), “slut rock” band—a moniker they’ve bestowed unto themselves–Butcher Babies.

Butcher Babies is a five piece, utterly LA, groove-metal ensemble with call and response vocalists– Heidi Shepherd and Carla Harvey.  The only legitimate mosh-pit I saw during sunlit hours was for Butchers Babies set at the Jagermeister stage.  It coalesced quicker than a Texas tornado and did about as much damage thanks to the cut “Magnolia Blvd.”  “Mr. Slowdeath” picked up where Pantera left off—with warp-speed drumming, and bludgeoning bass at every turn.  The shock value of their vocals, lyrics (“Jesus Needs More Babies For His War Machine”), provocative club wear wanes after a chorus or two.  What’s left is a theatrical stage show, and undeniable musicianship. Also, everyone calls them the next big thing, so it’s best to familiarize yourself before the bandwagon is full.

Fuzzy tone, intricate-yet-subdued riffs, and whisper-sonar-screech drones, the Deftones took to the stage and brought a slat of seriousness with them.  “Diamond Eyes” and “Rocket Skates” ignited the crowd into the inexplicably volunteer act of Hail Mary-ing half-full macro-brews.  The sliver-screen stalker score in “My Own Summer (Shove It)” and the melodic melodrama “Change (In The House Of Flies)” to this point created the most frackin-esque seismic activity.  In the spirit of the substance abusing that goes on at music festivals, summing up the set was like snorting a Klonopin and chasing it with a case of Four Loko.

Once the 7:20-7:50 slot came to pass, what commenced was a Game of Thrones epic donnybrook betwixt rap-rock Canadian royalty Redlight King and the SoCal Holy Trinity of heavy-melody metal that is Kyng.  The Second-stage was closer to the portable latrine, so my fate was sealed, I was to embark on Redlight King first, Kyng next, and the beer tent thrice.

Redlight King opened with terrestrial radio readied “Comeback”.  It was professional musicians playing a professionally catchy tune.  As inane as that comes across, on a day of dropped-d tuning, and distortion turned to 11, it was greatly appreciated.  “Built To Last” is built on steady BPM’s and skeleton keyboard chords.  The words risks throwing it’s back out by doing all the heavy “uplifting”.

I must move on to the catty-corner kingdom, the Jager stage where Kyng was assaulting the common folk.  “I Don’t Believe” instantly made me a believer.  It’s crunchy heavy metal, sans the inarticulate cookie monster chant.  Band leader, Eddie Veliz voice is so crisp, it would make Chris Cornell’s timber become it’s audio-slave.  No hyperbole, the output this trio produces induces disbelief.

When I heard “Electric Halo”, I wrote a note in my mid-generation iPhone to break the freelance writer’s cardinal rule, actually purchase Kyng’s latest album on iTunes—it’s jewel-studded crown that I never want to let go of.

The experience I had with Five Finger Death Punch, was akin to being “over” online dating, then going on one last OkC/Tinder rendezvous assuming it’ll be just more humblebrags with trite banter–and then blam, an actual connection.   As I researched this uber-popular LA rock group, I found their music nothing I’d be too interested in.  Frontman Ivan Moody, came out and held a fan-made sign that said “Fuck Haters, I Stand With Five Finger Death Punch”.  Perhaps I wasn’t alone in my disinterest?

After the confrontational but harmonious ditties like “Under and Over It” and “Lift Me Up”, I start to come around.  It seems like everyone bought a ticket to experience only this act.  Shout-alongs and emotive body-moving started to get to me—in the good kind of way.  Moody’s banter ranged from Spurs talk to very genuine sentiments about life.  First singer I saw all day who actually wore his heart on his sleeve.

“The Bleeding” and “Never Enough” really connected with society’s unappreciated who are sick of it.  Dare I say, the performance alone converted me into a fan.  5FDP won the River City Rockfest.

Metal supergroup Hellyeah (Chad Gray-Mudvayne, Tom Maxwell-Knife’s Out!, Vinnie Paul-Pantera), is so prolific at their trade, they make you feel like pitiful neophyte when it comes to listening to music.    Among the highlights were remorse-less “Cowboy Way”, and new single “Sangre Por Sangre (Blood For Blood)”.

To perhaps clear the throats of the congregation or our preacher’s, the first few bars of Journey’s “Don’t Stop Believing” played, building up to the part where Detroit is mentioned.  Then came a pre-recorded sermon where Kid Rock morphed into a spoken word artist, thanking the troops and promising not to disappoint.  “Devil Without A Cause” kicked open the show with raps, and hyped up hops.

Though he’s dabbled in different genres his entire career, his showmanship has always been what’s put food on the table.  “You Never Met A Motherfucker Quite Like Me”, “American Badass”, and “Cowboy” kept with the outlaw motif of the whole fest intact.  “All Summer Long” and “Wasting Time” appeased Rock’s pop music contingent.  Ultimately, regardless where you stand with his diverse catalog, seeing Kid Rock live has now become one of those things you just “have to do” if you’re a music fan.

In closing, like every other gadabout at the fest, I went looking in search of a peaceful spot on terra firma to take a moment a recalibrate.  The spot I chose happened to be the path of Chino Moreno—with security in tow–walking back to the gated bus area was a girl who one might describe as an outcast.

She said hello to him.  He said hi, and kept walking.  Distraught, possibly because she didn’t ask for a picture, the girl ran to find her friend, which turns out was a just as big as a Deftones fan as the visibly awe-struck young lady.  Once she found her pal, they sprinted to Moreno, and caught him right before he made his way to his tour bus.  They got that pic and the autograph they wanted.

Despite hard rock, and heavy metal’s rough exterior, the people who play it and those who listen to it, all just want the same thing;acceptance–which all 23,000 of us got that for 10 hours on that wet and wild Saturday.