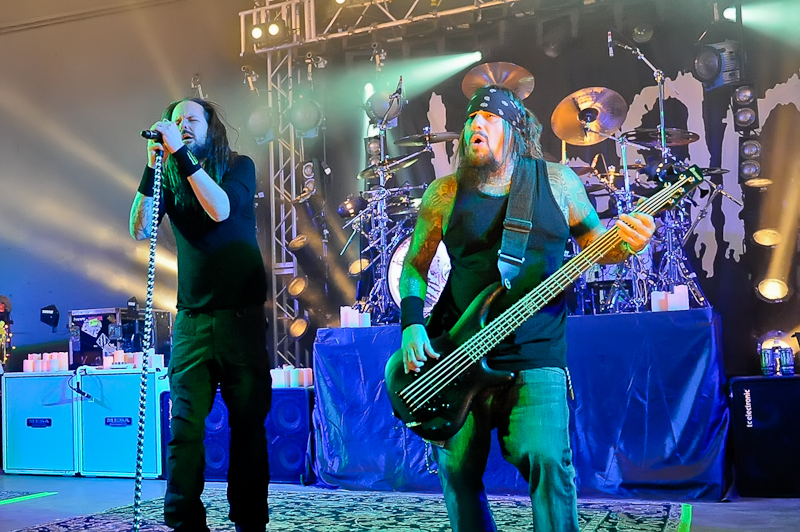 Only a select few acts make it out of an era where a specific musical genre becomes mod. Record labels transform into Xerox machines and make copies of the bands that direct said movement, which then leads to a lack of longevity–a musician never dies, trend-chasers do. As the embers of Nu-metal turned from bright red like Fred Durst’s Yankees ball cap to blacker than the inside of a Slipknot member’s never-been-washed-jumpsuit, one act emerges from the ashes–nope, it’s not Static-X; it’s Korn.

Celebrating the 20th anniversary (21 years, technically, as the current touring cycle ends after this leg) of their self-titled, debut album Korn, the Bakersfield, California hard rockers played to a sold out assemblage of their followers Monday night October 19, 2015 at Stubb’s in Austin.

Fury-slingers of their ilk tend to bypass the EDM, Indie Rock obsessed bailiwick that is the live music capital of the world for the brute, bloodlust rock scene of San Antonio. Korn graciously fed the hard rock starved contingent of agro-Austinites. The male style choices were black holes of cotton and denim with islands of facial hair adrift on chins shrouded by long locks dreaded or rubber-band braided. Females in attendance wore skin-tight everything and, collectively, every naturally and unnatural hue of hair color was accounted for.

When not being launched in the air at the pit as an offering to the rock gods, the drinks most imbibed were pirate rum and carbonated caffeine water, along with the kind of brews that Austin’s craft beer nerds abominate.

Like clockwork, at 9 PM, the house lights vanished, a candle-lit setup illuminated the stage as metal workhorses cantered on to the stage one by one.

You’d be hard pressed to find a more sensory assaulting, testosterone combusting track one, side one of a hard rock album in the last twenty years than “Blind.” As the sticks dinged the cymbals in an ever-building manner, the bass subtly created barometric pressure and the guitar parts surrounded the listener like currents in a riptide headed for a sea of chaos. The crowd was caught in the undertow when vocalist Jonathan Davis asked the lifesaving question of, “Are you ready?”

It was non-sexually (maybe sexually for some) orgasmic. Instead of the commonplace moshing that they’ve played this song in front of for decades, the onlookers just opted for personal space and whipped out their video cameras–you know, the type that can technically make phone calls, too–and recorded every moment.

“Ball Tongue” was more of a dance number in disguise than an aggressive tune. The rhythm and beat were the perfect stage for Davis to do his signature vocal rap-talk-sing boogie. Like out of a Saw film, the drop-D tuned guitars were delightfully disturbing. The song ended with samples of 90’s grooves “It Takes Two” and “La Di Da Di.” A few mixing board gaffes pinged the radar of any audiophiles present, but the lot were too in their nostalgic heads to notice.

A rhapsody of breakdowns, tempo changes, and rage, “Need To” and its “I Hate You” battle cry, engendered the troops to engage in martial law. The pit was formed. “Clown” was an American horror story with a tortured melody that’s inescapable.

“Devine” displayed sludgy and frantic tendencies. You could feel the bass drum moxie that animates the aging rockers. As tech money keeps downloading into the state’s capital and condos are erected as frequently as a game of Simcity, one thing remains unchanged about Austin, it’s a PC, Liberal town. With that said, the reprehensible slur that the song “Faget” shares its name with, was hurled freely into the incandescent night sky, though not with hate driving it but the feeling of empowering acceptance. Weird.

The bagpipes lead, satanic nursery rhyme medley that is “Shoots and Ladders” has aged well, surprisingly. To me, the ditty always teetered on comical but never quite slipped on that proverbial banana peel.

“Fake” saw the showman, showing off what he can do with his organ and tissue made instrument. The crowd adopted “Lies” like if they were all involved on a Lip Sync Battle that airs on Spike TV, except they broke the rules and shouted the lyrics in a deafening manner.

“Helmet In The Bush” was a deep cut appreciated by the chain smoking die-hards. With the spotlight on Davis, the front man went into a Gregorian chant phrase to introduce “Daddy”. Devoid of any radio rock affectation, it was a welcomed glimpse of his stellar bravatto and dynamic vocal chops.

Intermission was shorter than any Korn interlude, but offered ample time to reflect with the anticipation of hits on the horizon.

“Falling Away From Me” felt more like a resurrection than vigil for our collective fallen angst. Everyone with a pulse, pumped every word out of the mouths which resuscitated the band from their brief break. “Here To Stay” bludgeoned the crowd to near death. The pit retaliated, tobacco-laced lungs red lined.

Post-platinum height of their popularity cuts like “Coming Undone” and “Spike In My Veins” we’re kindly embraced. Ultimately everyone knew what seventh-string scratching, speaking-in-tongues scat number was next.

The evening’s aural coup de grace was “Freak On A Leash.” All those who pussyfooted around body surfing put on their liquid-courage lined wet-suit and caught waves while clipping a few smartphones.

Albums-in-their-entirety gigs like this one have a built in playbill. The opening act roused sentimental longings, the b-sides moved the albums’ plot; the final few cuts of the record heightened the story-lines, and the rising tension kept upping the ante until mercifully the climax was met with a murderer’s row of hits.

The falling action in this case saw the tribe of Nu-metal revelers spurt on Red River and its watering-hole lined streets. My ever-wandering soundwave-cathers eavesdropped on convos of which sixth street bar should be invaded and if a potty break break is in order before the long drives back to Temple and San Marcos. Like any good novel thematically centered around rebellion, tonight wasn’t about the characters we’re supposed to find important, but it was about the disenfranchised afterthoughts. Korn was the conductor, but the crowd was the symphony.