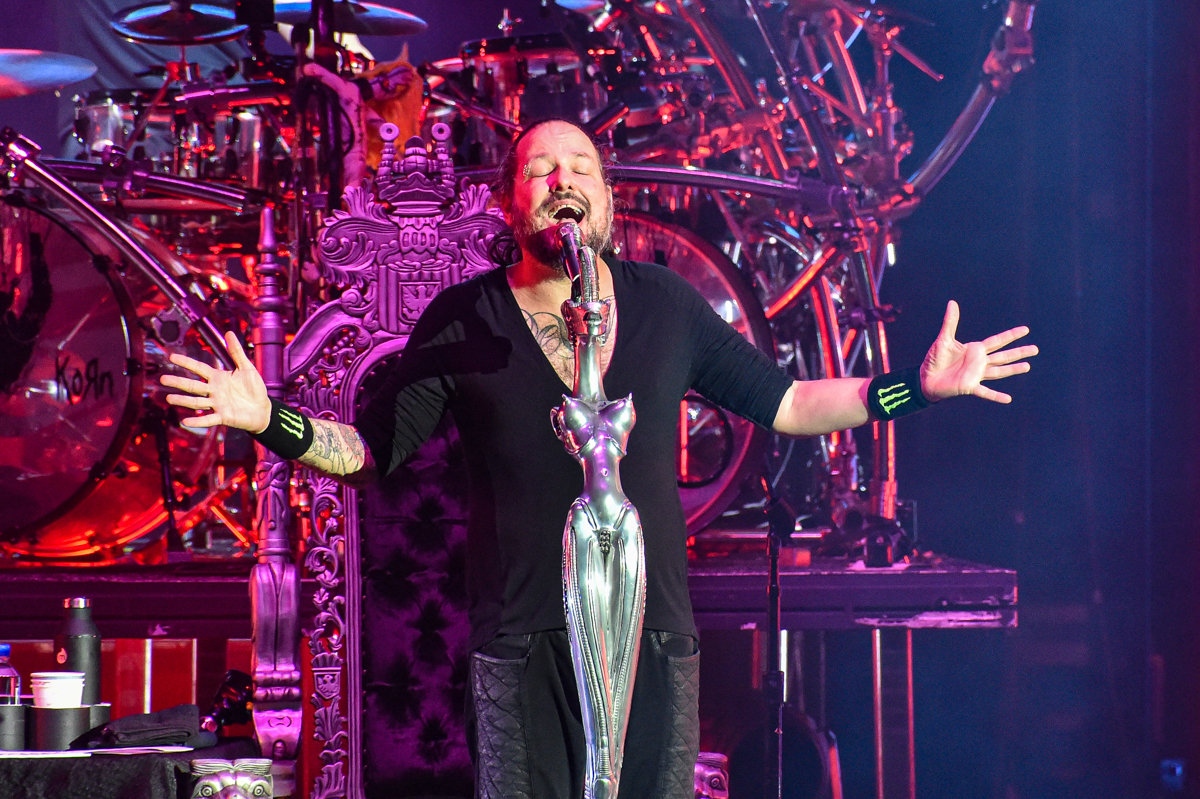 Korn, Staind and Fire From The Gods in concert at Germania Amphitheater in Austin, Texas

AUSTIN, TX – SEPTEMBER 18, 2021. I drove up to the Germania Insurance Amphitheater in Del Valle, Texas, just outside Austin, to witness nu-metal acts Korn supported by Staind and Fire from the Gods.

I could not have asked for a more beautiful day, but I wasn’t prepared for the sun because I haven’t been outside of my house for weeks. I proceeded to my seat through a sea of mostly people in black shirts, thinking it was fitting to hear Stevie Ray Vaughan pouring out of the P.A. in absolute Texas pride. I overheard one lady say, “My legs are itching because they hurt and are burnt!” It was 94 degrees and sunny, felt like 97 degrees, and I forgot to bring sunscreen.

There were banners on stage promoting the first act, Fire from the Gods. These hometown heroes are from our own lovable Austin, and they did not disappoint. Between songs, their on-stage banter ranged from “Hands up!” to “Make some noise if you are from the 512!” I made some noise. They reminisced about when they were starting out playing on Sixth Street at bars like the Dirty Dog. They tore through their set with such gems as “The Voiceless,” “Fight the World,” and “Right Now.” They even managed to slide in a Rage Against the Machine cover of “Guerrilla Radio,” and it was pleasing.

By this time, the weather began to cool down as the sun sank into the horizon before Staind played their set. There were five screens on stage with one behind the drums and two each on either side of that. A wall of Marshall stack cabinets (and maybe some Peavey?) took up a good amount of space and guaranteed the sound was going to be loud!

A short intro with clock-themed visuals brought the band out. Lead singer Aaron Lewis, brandishing a Les Paul guitar with the American flag painted on it, began their show with the song “Eyes Wide Open.” Their sound melts between a heavy chaos and soft serene. Some other honorable mentions during their set were “Crawl” and “Paper Wings.” I remember some compelling puppetry images during one of their tunes. There was not much repartee between songs, but Lewis did manage to say something along the lines of how he was going to keep his thoughts to himself, which was probably a good idea in uber-liberal Austin.

The night would not be complete if this crowd missed out on Staind playing their biggest hit, “It’s Been a While,” and they did not disappoint. With a great crescendo they closed out the set with “Mudshovel.”

By now, darkness had covered the amphitheater and the moon crept up to the left of the stage and was a welcoming sight in this clear Texas sky. The onstage video screens from the Staind set were removed, along with the drums and amps. We were getting ready for the main event, Korn!

Barnum and Bailey illusional tactics were used in the way of a giant white curtain. It took a short moment for the crew to organize the stage behind it. The Korn moniker reflected on to the curtain and an onslaught of smartphones appeared over the heads of almost every participant to document this joyous occasion.

A very low bass introduction could be heard before the band kicked into their first banger, “Insane.” Lead singer Jonathan Davis crooned, “How y’all feeling out there!” The band had to reschedule dates due to him testing positive for Covid-19, and he let it be known that their guitarist James “Munky” Shaffer was back for his first performance of this tour because of the same reason. Referring to Covid, Davis blasted, “I kicked its ass, and he did too!” The crowd cheered.

The laser portion of the light show was quite impressive. There was a majestic throne perched in front of the drum riser, which proved to be useful whenever Jonathan needed to take a rest. Rock and roll can be exhausting sometimes. The surprising element to Korn’s share in metal music is how melodic the guitar parts can be while peppered with copious amounts of effects pedals, impressive enough to have basically invented an innovative genre from the mid 90’s now known as “Nu-Metal.”

But their influences didn’t stop there. They have a bit of spice in the form of EDM sprinkled in the mix. I couldn’t help but notice it when they performed their song “Victimized,” that some jungle-esque drum fills made way onto this track.

Davis played the crowd during “Clown,” with a call-and-response growling match with the viewing audience. There were some impressive bass and drum solo tidbits. They performed “Coming Undone,” with snippets of Queen’s “We Will Rock You,” that provided smiles amongst the most hardened of fans.

They finished the set with the unforgettable “Freak on a Leash.” But the show wasn’t over. Of course, there was an encore, or should I say, “On-Korn?” Corny joke, I know. The song that stuck out the most at the end was “ADIDAS.” The crowd sang along, and I looked down to noticed I happened to be wearing my Adidas. It was fun, and yet it was time to go home. Which brings me around full circle from the beginning of my excursion. I had to get back to my car, which felt like it was a world away!