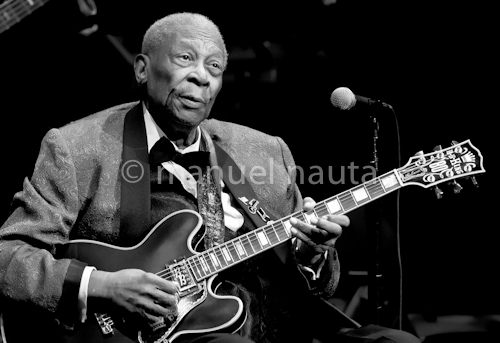 (UPDATE: B.B. King died on May 14, 2015  in Las Vegas, Nevada) Legendary living blues master Riley B. King known as B.B. King performs in concert at The Majestic Theater on August 19, 2012 in San Antonio, Texas. San Antonio native Ruben V. opened the show for B.B. King, I have not posted any photos from Ruben because during the first three songs there were only some low level red lights illuminating the stage which made it impossible to take a photo. Ironically, starting with song four, the bright white spotlight was turned on but no photos were allowed after song three.

Once B.B. King’s band came on stage people began to clap and cheers in eager anticipation for B.B. to take the stage. After some intro music by the band, B.B. walked on stage to a standing ovation from the audience. From there on it was nothing but the blues at its’ very best! After his first song, B.B. introduced the band with many humorous comments and descriptions. Then one more song for me and I was done, as the saying goes for photographers, “first one in, first one out.”