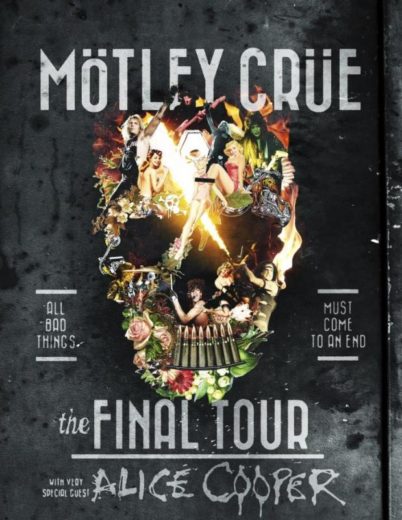 LOS ANGELES, Jan. 20, 2015 — Iconic rock band Motley Crue announced today on Fox & Friends the details of their final performance. This will mark the end of their touring career and will conclude their two-year Final Tour cycle at the end of 2015 on New Year’s Eve, Dec. 31 at Staples Center in their hometown of Los Angeles where the band’s career began 34 years ago. The band will celebrate this week’s big announcement with a performance on The Tonight Show Starring Jimmy Fallon on Thursday, Jan. 22.

Motley Crue first announced plans for their two-year Final Tour by signing a Cessation Of Touring Agreement at a press conference in Los Angeles in January 2014, solidifying the end of their Final Tour at the end of 2015.

The 2014 leg of the Final Tour was one of last year’s top grossing tours, selling close to a million tickets across 72 cities and grossing more than $45 million.

“Motley Crue’s Final Tour has been a massive global success and a true testament to the popularity of this legendary rock band,” says Rick Franks, Live Nation’s Regional President of North American Concerts. “New Year’s Eve 2015 will mark the end of an era in rock history but there’s no doubt that Motley Crue’s music will influence generations of artists for years to come.”

After 34 years performing together, the 2015 leg of the Final Tour will see the band play Japan in February, then Australia/New Zealand in the Spring. In June, Motley Crue will say farewell to the European Festival circuit with 3 massive performances at Download (UK), Sweden Rock (Sweden) and Novarock (Austria) Festivals before taking their can’t-miss show back to the U.S., Canada, and Mexico this summer for 34 final North American shows due to tremendous fan demand.

The North American dates will see the band visit cities such as Chicago, New York, Toronto, Atlanta, Mexico City and will be taking place in arenas exclusively to ensure fans in all cities get to experience the full show production of the Final Tour:

“In some of the cities, we could only reach a fraction of the fans who wanted to come see us play last year because of ticket demand so we’re coming back to those places to bring them our full production including the Cruecifly drum coaster, as well as all pyro and every other bell and whistle. Even despite the overwhelming fan demand we can only add so many new cities in North America because of our commitment to take the Final Tour global on our final year,” says Nikki Sixx (bass).

Audiences can also expect a high-energy performance from very special guest Alice Cooper, who joined the band for the Final Tour in 2014.  He will be tearing up the stage for crowds across North America once again. The pairing has been roundly praised as a must-see by fans and media alike.

Following the North American summer shows, the band will take the Final Tour on more international dates this Fall before “all bad things come to an end” for good on New Year’s Eve 2015.

Coinciding with today’s announcement and the theme of the Final Tour, the band also released its new single “All Bad Things” this morning which is available for sale digitally here: http://smarturl.it/MC_AllBadThings. The single is accompanied by a video clip of highlights of Motley Crue’s 34-year career which premiered today on The Tonight Show’s blog – http://fallontonight.tumblr.com/ to preview the band’s national TV appearance on the show this Thursday.

To give back to the fans for their support over the years, Motley Crue will give away their best selling GREATEST HITS album for free in partnership with Google Play for one week only. Download the album through Tuesday, 1/27 here: http://goo.gl/3hg3Qw. The compilation album includes classic hits like “Dr. Feelgood,” “Home Sweet Home,” “Kickstart My Heart,” amongst many more – check out a special message here: http://youtu.be/Fj03fG7ngas.

Motley Crue are also in the process of putting together the ultimate collector’s album package for the fans to be released later this year which will include the new track, “All Bad Things” amongst many other surprises, details of which will be announced in the near future.

Since 2015 is all about celebrating the legacy of Motley Crue, the band and fans from around the world will also be able to share their memories, pictures, thoughts and stories of 34 years of Motley Crue online at www.motley.com using #RipMotleyCrue.

(with Very Special Guest Alice Cooper except dates marked with *)

Hailing from Los Angeles, CA, the quartet—Vince Neil (vocals), Mick Mars (guitars), Nikki Sixx (bass) and Tommy Lee (drums)—has commandeered the rock pantheon for over 30 years. In that time, they have accumulated worldwide album sales exceeding 80 million, seven platinum or multi-platinum albums, 22 Top 40 mainstream rock hits, six Top 20 pop singles, a star on the Hollywood Walk of Fame, three Grammy nominations, four New York Times bestsellers (including the band’s biography, THE DIRT) and countless sold out tours across the globe, playing to millions of fans. Motley Crue was the first rock band in history to have completed an epic sold-out Las Vegas residency at The Joint at Hard Rock Hotel & Casino. The band continues to remain on the forefront of entertainment reinventing themselves via not only their music but also their mind blowing live shows featuring never seen before elements, such as Tommy Lee’s drum roller coaster. Motley Crue was featured in KIA MOTORS’ award winning 2012 Super Bowl commercial.

Alice Cooper is a true rock icon, having pioneered the use of theatrics and shocking images onstage in concerts from the earliest days of the original band of the same name.  Since going solo, he has continued to produce elaborate stage shows providing fans with both shock and rock of the highest caliber.  Inducted into the Rock N Roll Hall of Fame in 2011, Alice has toured and recorded continuously, with his most recent album being Welcome 2 My Nightmare.  Recorded with longtime collaborator Bob Ezrin, who produced the original ground breaking, multi-platinum Welcome To My Nightmare album in 1975, the album picks up right where they left off, with Alice trapped in his own warped mind.   Alice’s catalog of hits and anthems, including “I’m Eighteen,” “No More Mr Nice Guy,” School’s Out,” “Elected,” “Poison,” and others, are included in his current “Raise The Dead” show, which also features his musical tribute to his fallen friends John Lennon, Keith Moon, Jim Morrison and Jimi Hendrix.  Currently, Alice’s touring band features the three guitar attack of Orianthi, Tommy Henriksen and Ryan Roxie, backed by bassist Chuck Garric and drummer Glen Sobel.   Additionally, “Nights With Alice Cooper,” Alice’s nightly radio show, is available in nearly 100 cities in the USA, Canada, Australia, and the UK.  The show features his favorite classic rock songs along with his insider anecdotes about many of the artists.