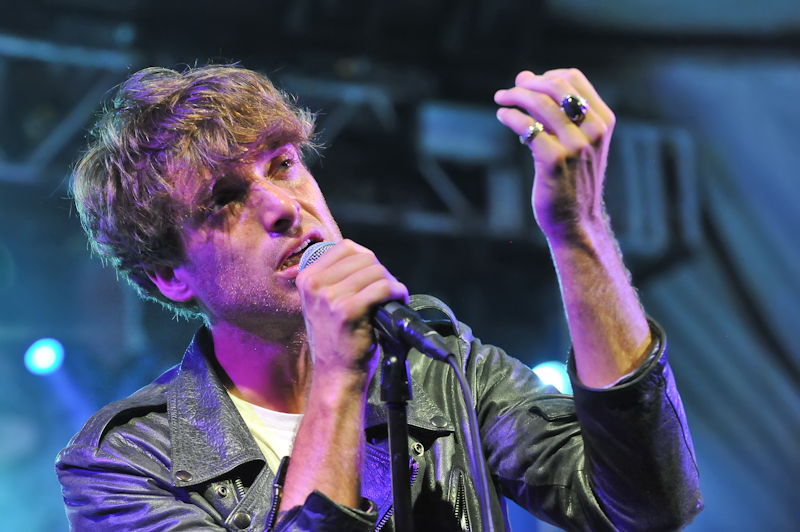 AUSTIN, TX – October 9, 2014/ Gravel entered the shoes of the excited music fans as they piled in to Stubb’s Outdoors on Thursday night to rock out to Jimmy Cliff and Paolo Nutini. The two returned to Austin after the previous weekend’s ACL festival for a late night show, and this time they were headliners.

As the music revelers weaved their way towards the stage, it was easy to point out who was here for each artist. Jimmy Cliff, Grammy-winner and member of the Rock and Roll Hall of Fame, attracted longhaired 21-year-old men and middle-aged couples sporting faded denim. The millennials waiting for Scottish singer/songwriter/heartthrob Paolo Nutini took selfies near the bar and anxiously awaited his six-pack abs.

Jimmy Cliff, adorned in a bright golden yellow ensemble, ignited the stage with his 8-piece band just after 8 PM. To open their set, the musicians poured out an earthy and soulful cover of The Melodians’ “Rivers of Babylon.” The crack from the first snare drum startled some audience members, but the joyous musicians kept flooding the audience’s ears with tight, soulful harmonies. Within minutes, Cliff’s groovin’ shoulder shuffles inspired wild hip swivels from the listeners. The condensation dripping off the 18 oz cans of beer did little to disperse the sweat seeping through every dancer’s shirt.

After turning Cat Steven’s melancholy “Mad World” into a rousing reggae jam session, Cliff paused the music to preach his gospel. Speaking against a piercing white moon and dim, scattered stars, Cliff raised his arms over his head and radiated his energy to the edge of the venue. When he said the word, “peace” dozens of listeners instinctively raised two fingers. Whoops and Hollers accompanied the end of his message about ending war, and he launched into “Vietnam,” only, this time, changing the chorus to “Hey Afghanistan.”

After “Treat the Youths Right” the band began subtly passing around a soft, black dishtowel to soak up the perspiration from their inspired performance. By the time it reached the bass player during “Reggae Music,” it was soaking wet and thrown off the stage.

The audience collectively caught their breath during the power ballad, “Many Rivers to Cross.” Cliff clenched the microphone with both hands, closed his eyes, and reared his head back as his piercing tenor voice rang out. Each listener took an introspective moment to understand what, exactly, their river was.

Cliff then sailed into his famous cover of Johnny Nash’s “I Can See Clearly Now” followed by his 1972 hit “The Harder They Come.” If Cliff wasn’t the opener of this concert, he would probably have taken this opportunity to hear the audience beg for an encore. Instead, he dove in to “One More.” It was hard to accept the ending of his set as the band trailed off the stage to audience echoing the chorus “One more! One more!”

The sea of peace signs and tie-dyed shirts seemed to part as the sound crew made way for Paolo Nutini and his 10-piece band. In came the tween queens, young lovers, flip-flops, and Instagram pictures. Nutini, wearing a thin white T-shirt, long turquoise necklace, and suave leather jacket, commanded the stage with his puppy-dog eyes. He opened with the first track off Caustic Love, “Scream (Funk My Life Up).” When his sexy, sandpaper-like voice sang, “And in the climax she screams for me” three blonde girls, as if on cue, sent piercing, resonant “Woos!” through the amphitheater.

Almost as commanding as Nutini was his backup singer, a soulful voice standing ten feet behind the rock star. She smoothly coasted on the first few lines of “Let me Down Easy,” the second track on Nutini’s latest album, and enchanted the audience’s attention ever since.

As the sticky humidity created beads of sweat on his brow, Nutini removed his leather jacket and sent another wave of euphoria through the blonde girls in the front row. He then paid respect to his first wildly popular album, “These Streets.” After “Don’t Be Hasty,” Nutini teased the listeners by riffing some of the lyrics to “New Shoes.” Surely, he’d come back to this song for the encore.

The dirt beneath everyone’s feet became a dance floor during “Cherry Blossom.” Arms, legs, and hair flailed in every direction. A shrill “Ouch!” percussively accompanied the song when a tipsy college girl kicked another listener in the back as she climbed on her boyfriend’s shoulders.

As Nutini threw back a lukewarm beer, a middle-aged woman impulsively screamed “Play Iron Sky!” followed by a whispered, “Sorry, did I say that out loud?” The surrounding people laughed, shared a beer, and waited for their favorite song. “Iron Sky” sent the surrounding women into a brief hypnotic state, which they quickly snapped out of during his encore.

Nutini ended his concert with a solo acoustic version of “Last Request.” When the lights came up and the house music quietly roared the audience stood still. Clearly he finished the set, but he failed to play “New Shoes.” With his third studio album pumping out a newer, funky sound, it’s obvious Nutini wants to move away from his older hits, but it was jarring all the same. Surprised yet satisfied, the crowds discussed drink plans as they shuffled their way back to their cars, kicking up dirt from their shoes as they passed.