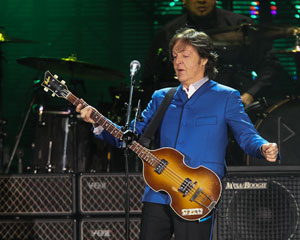 How was Texas so blessed to be graced with the presence of Sir Paul McCartney Wednesday night at Minute Maid Park?  That is the question I will ponder for many years to come.

It’s unlikely I’ll ever know the answer to that question, even though I might ask ‘his people’ and report back to you faithful readers of HMR. In the meantime, I’m going to just feel thrilled and honored that I was able to see in person Beatle One.  To be able to photograph him was just a great big bonus!

On this cool fall evening in downtown Houston, I can report it was a sight to see.  There were 39,000 of us, willing to deal with the cold weather, significant traffic and to part with many of our dollars to witness this amazing event.

Paul, and the band mates he’s been performing with for over ten years now, spent nearly three hours on stage, in the shadow of the left center field fence in Minute Maid Park.  During the show they probably got more cheers in that three hour period than those who played the last 82 games on that same turf …but we won’t go there!
McCartney’s ‘On The Run’ Tour had only one date in Texas, only two in the United States, and just five total in North America.  We were so very fortunate to have him grace any piece of turf in our fine city!

As I pondered all I witnessed this night, I reached one sure conclusion.  He Paul came to the Lone Star State because he knows what kind of live music fans we have in H-town.  And he paid us the biggest compliment a city can receive from an artist of his caliber… or is that Excalibur!?  Huge thank you, Sir Paul!

Not only did he come to play he came to play his ass off. He spent almost three full hours on a very simple stage set up without a lot of  bells and whistles to help him make it through the night. He just came to play, entertain, jam with his band, and enjoy himself.  He somehow managed to make 39,000 fans feel like they were in an intimate setting surrounded by the dazzling lights and sky scrapers of our beautiful downtown skyline.  Yes, the roof was open.  Brilliant call Sir Paul!

Thank You Astros’ ownership for allowing him to come in and take over your beautiful park… and sorry for the earlier shot.

His set list included over 30 songs; a perfect mix of early Beatles, solo efforts, and Wings hits.  I have no doubt that everyone got what they came for:  Beatles’ Helter Skelter rock and roll, Day Tripper, All My Loving – Wings’ My Love, Band on the Run.  He had it covered all night long!

Now it’s at this point I must admit that I have a strong biased towards his Wings’ days and he just blew me away with every one of those songs (as well as most of the others even though, admission number two, I was never a Beatles’ Fan back in the day).

Certainly the highest Highlight of the Evening was…Live and Let Die.  He rocked it beyond any words I own and blew the roof off the field….thank God it was opened beforehand!

ImageThis guy obviously could have played for three days and nights, rather than three hours, given his musical catalog.

Good grief, he has 60 Gold Albums, and has written, or co-written 129 songs that were in the Billboard Hot 100 Chart with 91 of them making the Top Ten and 32 going to Number One! Did I mention that he wrote 43 songs that sold over a million copies?

This night he alternated between being out front with his left handed guitar strapped over his shoulder and climbing the steps to his black grand piano and serenading us from his piano stool. The sounds coming from both of these locations on the stage was PERFECT…not good, not great, but PERFECT. You could hear every note and if you preferred you could watch it being played on one or the other big screens left and right of the stage. Doing so was like watching my new Hi-Definition TV at the house….it was like being on stage with him.

Did I mention there was NO intermission,  no long breaks between songs, no 20 minute guitar or drum solos, no wardrobe and set changes? Did I mention he played his ass off for almost three hours and started at a reasonable time, especially given the reported difficulties many had in getting to the field?  I think I heard the Rockets were playing right down the street, and it was rush hour besides. Well worth the effort!

More amazing to me than his playing and singing was the fact that he appeared to this writer to genuinely be enjoying himself and having fun in Texas. Keep in mind this guy is 70 years old and has been doing this for a very long time! He looked great, and behaved like he was on the top of the world. Heck, at several points he started dancing after the song finished, frequently held his guitar up over his head, and at one point he started waving our State’s beautiful flag…obviously well received by this crowd!

This concert was the fastest 3 hours I have spent in a very long time and I am a guy who is very sensitive about time. Much of what he did was a blur to me and yet some of those moments I will not likely forget:  The already mentioned Live Or Let Die, Hey Jude , and the crowd sing along that went with it, Lady Madonna and the photos of the Iconic Women whose images were flashed across the screen…..including the likes of Queen Elizabeth, Princess Di, Lucille Ball, Tina Turner, and way more than I can remember.

ImageMcCartney’s Yesterday, what can one say other than it resonated throughout the Park nanoseconds behind Paul’s voice. Valentine for his new bride was very touching , Maybe I’m Amazed was simply that…amazing.  I was touched by Blackbird and his explanation of being inspired to write it for people in the deep south of our USA back in the 60’s.  He said he wanted to provide hope. I think he did.  And we still need that today.

He mentioned his dear departed friend John Lennon and then proceeded to play a song he had written for John called Here Today. He also honored George Harrison and asked everyone to give him a ‘let’s hear it for George’ salute.  I think George looked down on Houston with a little smile on his face.  Sad to think that two of the four are now gone.  Their time on earth was cut way too short, and for such tragic reasons.

In closing I feel I witnessed a musical autobiography of a great entertainer and humanitarian.  What a pleasure it was that he stuck to singing and did not shift to preaching.  I’m so glad this concert was after the election and I didn’t have to hear any politicizing.

THANK YOU FOR EVERYTHING SIR PAUL McCARTNEY. YOU WERE A TRUE KNIGHT IN SHINING ARMOR FOR ALL OF FANS ON THIS NIGHT.

Until next time I hope you will keep it between the navigational beacons.

Review and photos by David Clements.