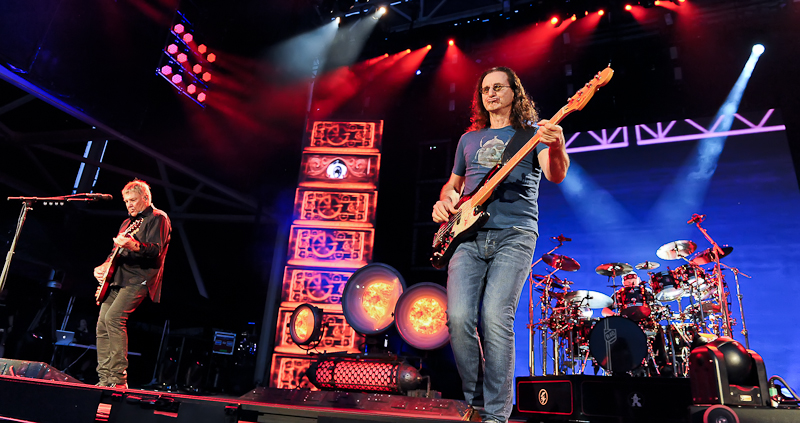 AUSTIN, TX – May 16, 2015 The R40 concert landed in Austin on May 16th for the fifth stop of its 34-city tour. As the threatening black clouds dissolved into the night sky, Rush fans piled in to the Circuit of the Americas Amphitheater with sense of bittersweet excitement. Conversations filtered through the lines at the food trailers. Though many had seen the trio in concert before, the R40 show unanimously seemed more significant. Rumors flew like the mosquitoes leeching off of the glistening, sweaty music lovers. Would this be Rush’s final tour?

Middle aged men and women squeezed through the lingering crowd, and college boys double fisted frothy cups of beer while willing the liquid not to spill. Golf carts continuously herded the concertgoers into the arena like shuttles on the way to Disneyland. While men popped their knuckles to prepare for two and a half hours of air drumming, Rush’s drummer Neil Peart warmed up backstage. When the lights flashed over the largest permanent stage in Austin, Peart sat upstage center on his throne of rhythm, cymbals, and bells. Roars of applause reverberated against the epic stage with Peart’s opening roll in “The Anarchist.” It’s no wonder the young, aspiring rockers in the audience idolized him with black shirts that read “Got Peart?”

Die hard Rush fans would feel cheated if a portion of their evening went to an opening band, so the R40 concert was split in to two sets. The first, entitled “The World Is… The World Is,” continued with “The Wreckers,” “Headlong Fight,” and “Far Cry.” Washing machines and videos of swirling kaleidoscopes lined the back wall during “The Main Monkey Business,” cultivating an industrial and mechanical atmosphere. Bassist and lead singer Geddy Lee then announced “How It Is,” a song from their 2002 album “Vapor Trails” that was just added to the tour. The trio obviously created a set list of songs they craved playing, and their contagious enthusiasm spread throughout the arena.

Immediately following, Rush rocked into “Animate.” Beer sloshed from the recyclable cups as the crowd threw up their arms in excitement. The lyrics “polarize, sensitize, criticize, civilize” flashed against the screen, begging for a 10,000 person sing-a-long. The videos didn’t stop their flashiness there. During “Roll The Bones,” famous faces made cameos in a psychedelic tie dye of lip synch genius. Jason Segel of How I Met Your Mother fame and Game of Thrones’ Peter Dinklage comically rapped during the bridge section of this 1991 tune.

The set shifted during “Between the Wheels.” Men in red R40 jumpsuits wheeled on more washing machines and placed rubber dinosaurs on top of each one. At first confusing and robotic, the spectacle soon came together during “Subdivisions.” The dinosaurs cast a larger shadow against the screens as they rolled through sepia-colored footage of a 1950s neighborhood. The contrast between the mechanical, over-sized washing machines and the flimsy prehistoric toys created a dichotomy that expertly described the frustration in the lyrics. Even “In the mass production zone/Nowhere is the dreamer or the misfit so alone.”

After a brief intermission of atrociously long bathroom lines and jaunty conversation, Rush catapulted into their second set entitled “No Country for Old Hens.” It began with a stark, quick-paced video featuring Lee, Lifeson, Peart, and Segel dressed as pirates, Oz munchkins, and cartoonish chickens. Cackles of uproarious laughter echoed as Lil’ Rush from South Park closed out the video with their squeaky voices blaring “Tom Sawyer.” The lights immediately segued into a burst of color as Lee wailed, “A modern day warrior/ mean mean stride” and the audience finished with, “Today’s Tom Sawyer mean mean pride.”

After Lee snarled through the song’s stratospheric notes, the lights cooled to a blue and white beam for “The Camera Eye.” The booming vibrations from Lee’s bass tickled the cilia in the audience’s inner ears, but the electric force was so energizing that no one dared cover them up. “The Spirit of Radio” followed and inspired a circus-like, three ring celebration. Lee and Lifeson congregated center stage for a bass and guitar duo that put all other bromances to shame.

Just as the joy got overwhelming, the string players bequeathed the stage to Peart who reigned over his drums for a captivating solo. The pounding kick drums accelerated heartbeats and the cymbal crashes sent euphoric goose bumps across the crowd’s arms.

An acoustic guitar soon appeared in Lifeson’s hands as he draped it over his electric guitar for “Closer to the Heart.” The screens took on the decor of The Imperial Theater for the trio’s closing rock symphony “2112 Part I-VII.” This pulse-quickening sonic journey whisked the crowd into a frenzy. When the lights signaled the end of the set, many revelers left Circuit of the Americas contented without an encore. But Rush wouldn’t have that. Three minutes later, the house music ceased and the band stampeded back an on stage for an encore set of “Lakeside Park,” “Anthem,” “What You’re Doing,” and “Working Man.”

As the fans exited the arena, a light breeze fluttered their T-shirts and maxi skirts. Some people languished in the spring grass on the lawn section, not ready to end their experience. As their fingers dug in to the dirt, some wondered if they would ever get to see a band with this much history play a concert of this caliber again.