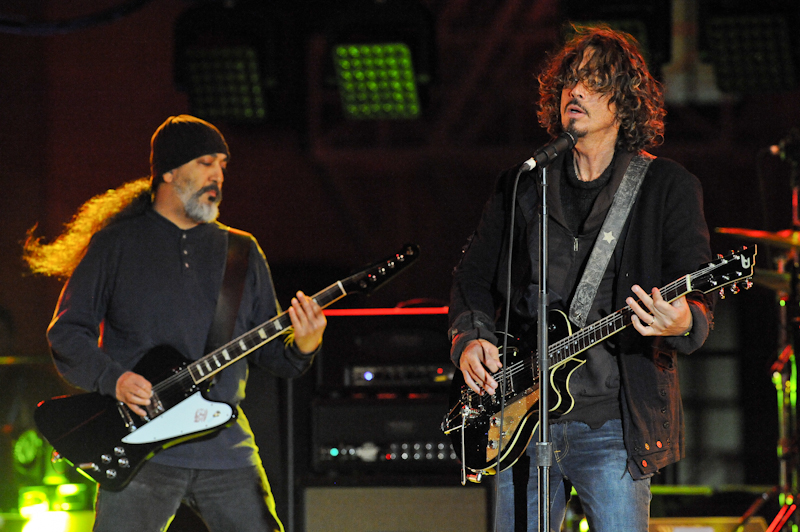 Austin, Texas – March 14, 2014: With the 20 year anniversary of their breakthrough album “Superunknown” on the horizon (re-issue out June 3rd),  Alternative-rock forefathers, Soundgarden jolted the rooftop of the Starr Building in Austin, Texas for their second South By Southwest (SXSW) performance in as many days.  The moonlit concert doubled as the filming grounds for an episode of DIRECTV’s Guitar Center Sessions on the Audience Network.

Soundgarden sold records back when that was a thing.  They’ve played iconic festivals before fests were brought to you by corporate conglomerates.  Heck, even their music videos landed in MTV’s rotation in a time long before MTV specialized in reality shows about teen moms and un-real worlds. The landscape of the music biz has changed, but Soundgarden has maintained their rock and roll roots.

The fire-code capacity crowd was mainly filled with the responsible, RSVP-type of SXSW’ers. Not too many people in attendance looked as if they would have been at the storied Central Tavern in Seattle where Soundgarden, Mudhoney, Alice in Chains, and Nirvana all cut their teeth.  Those who’s lives were greatly affected by the band crammed the first five rows and there was nary a lyric they didn’t recite.

The veil was lifted from deep-cable’s programming production.  The producer of the show advised the audience to feign madness for the cameras, and that host Nic Harcourt was going to introduce the band four times before they actually made their way to the recently erected stage.  And finally ladies and gentlemen, Soundgarden.

“Kickstand” sent a circuit of jilted energy out into the masses for the song’s minute and a half duration.  Uber-frontman Chris Cornell’s voice was grizzled but displayed clean-cut tone and pitch.  His howling of the lyrics “do it right” did right by us.  Long, corkscrew curls covered his symmetrical face with only a glimmer of his freezing blue eyes catching light.

The unmistakable guitar licks in dropped D tuning from Kim Thayil, indicated that one of the bands early singles, “Flower” was blooming.  Thayil, who Rolling Stone Magazine named on their 100th greatest guitarist of all time list, still has his Herculean muscle memory in those hasty fingers of his.  He moves on stage like big game in the brush, waiting for his moments to pounce.

“Hunted Down”, the Sub-Pop artifact had the Soundgarden, and Pearl Jam work horse drummer Matt Cameron, deserving of show pony accolades.  The drum outro was a battle march for Soundgarden lifers.

Syncopated, and restless, “My Wave” featured some great juxtaposition between complexity of their tunes and their effortless live performance.  “The Day I Tried To Live” was an opportunity for the light programmer and fog machine operator to shine, which they did.  There was an exciting call and response exchange between Cornell and his fist-bumping followers for “One more time around (might do it), One more time around (might make it)”

And now we head down a rocky road.  Soundgarden’s bassist Ben Shepherd bass didn’t sound right during “Been Away Too Long”.  Shepherd intermittently shook his head indignantly, and just blatantly stopped playing for moments.  Fiddling with his peddles and amps didn’t help.  After the track finished he very deliberately threw his bass backstage.  The rattled stagehand tried to make it right, and gave him an apology and a seemingly tuned guitar.

Shepherd’s glare and inaudible tongue lashing gave me the flashback feeling of “pissing off dad” so to speak.

“Mailman”, “Limo Wreck”, and the post-drug use pensive “Fresh Tendrils” played as Shepherd’s ire grew.  Murphy’s Law was in full effect.  He had monitor and microphone issues that the soundboard operator couldn’t seem to correct.

I’m not a body language expert but it was obvious that the bassist went into intimidation mode.  To be fair, this was a big gig which was to be televised and SXSW was their first string of shows since September.  There could have been extenuating circumstances that may have been building up, or his demeanor could have been merely misguided irritation because of his passion for the fan experience.  Nonetheless it was a jarring distraction and took me out of a couple songs.

Things started to come around on the psychedelic “Half”.  Cornell instructed all to “sing like children” for the mainly instrumental ditty.  The assemblage simply grooved for the first time all night.  Up next on the set list was the close-your-eyes-and-just-be breed of hymnal, “Superunknown”.  After an inspired rendition of “Burden In My Hand”, it was time for a murderers row of a final four song run.

“Black Hole Sun” was easily the most recognizable jam all night.  Full participation was in order as the choir looked to the sky and sung for the stars.  “Spoonman” surprisingly garnered a larger reaction than the previous number did.  Though a mosh pit could never get started, frenetic jumping provided foreground dancing for the band to feed off of.

Cornell ditched the guitar, and found his next-level rockstar presence for “Outshined”.  As he moved around the stage, the group was as cohesive as ever.

The band closed with the rebellious “Rusty Cage”.  After Cornell’s vocal duties were met he thanked the unfamiliar faces saluting him and went straight into the sole elevator stage left, ensuring his night was over.  The three remaining members, played an five minute outro of feedback and dissonant notes.  The last man standing was Shepherd who stood center stage and basked in the love.  Was he deserving of all this concentrated cheering? Of course, he’s an integral part of an important band.  Should he have given one last sneer towards the crew as he trotted off stage?  That’s up to the rock Gods to decide.

Catch Soundgarden this summer as they go on a co-headlining tour with Nine Inch Nails.