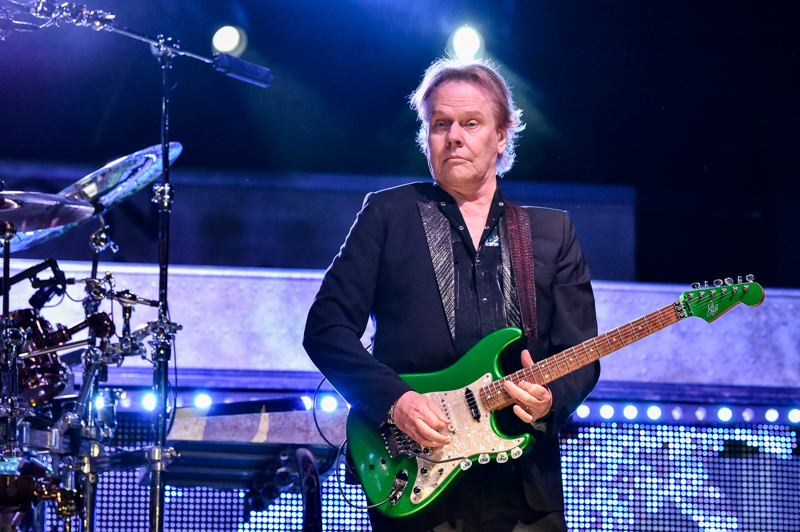 OCTOBER 16, 2021 Styx rocked the Levitt Pavilion in Arlington Texas like it was 1979! The band lineup included James Young and Tommy Shaw on lead vocals, Chuck Panozzo on bass and vocals, Todd Sucherman on drums, Lawrence Gowan on keyboard and vocals and Will Evankovich vocals and guitar and Ricky Philips bass and vocals.

Before the show started, the audience had a chance to enter a raffle and win a signed guitar by purchasing the new Styx CD Crash Of The Crown. Proceeds supported Rock To The Rescue (rocktotherescue.net) a 501(c)3 non-profit organization, whose mission is to build strong, healthy communities through the support of grassroots organizations across the country.

At 9:00 pm sharp the veteran rockers took the stage with flare and confidence. Four powerful spotlights and a large array of stage lights lit up the wood paneled Levitt Pavilion. Lawrence Cowan in his white suite played the keyboard with immaculate precision and energy. His dance antics and rotating keyboard proved he still is the showman we have come to expect. James Young, as usual, the band’s elder statesman, stood center stage, cool and collected with an occasional smile during his solos. James even tried a few stage jumps now and then, I guess these have gotten a bit less dramatic as they have all aged, even rock stars get old!

Tommy Shaw was standing stage left, still with his signature long blond curls. The COVID break did not seem to have affected his guitar riffs as he ripped through one song after the other with pure force and precision. Time did march on as some of the vocals sounded a bit stressed at times.

Next, Lawrence Cowan did band introductions, although I assume no one needed to be reminded since they have been around for decades. After Rockin’ The Paradise, Tommy told the audience “nights like these are unforgettable” and wondered what the world was like 51 years ago before Styx. He reminded us that Styx was the brainchild of the twins Chuck and John Panozzo as a segway into the song Fooling Yourself. Next up was Suite Madam Blue a tribute to the US Bicentennial from the 1975 Equinox album. This album saw the departure of guitarist John Curulewski and the introduction of Tommy Shaw to the band.

Tommy introduced the next song he wrote a while back called Too Much Time (Paradise Theater 1981) and explained that the origin of the song was about drinking at a local bar called Mark’s Tavern. To the amusement of the crowed, Tommy at one point changed the lyrics and sang “Too much time on my hand and James Young keeps on trying!” At the close of the song, the band walked off stage, lights went down, and Lawrence Cowan started an incredible keyboard solo, causing a total hush among the audience, one could have heard the proverbial pin drop at the Levitt. Then the familiar keyboard notes from Come Sail Away got the crowed going again. It looked like every single audience member stood and sang along with the chorus. This was the goose-bump moment and the show’s crescendo towards the mega stadium hits that were about to come in the encore, Mr. Roboto and Renegade.

If you have never seen Styx live make sure you go see their next show, a band of this quality, history and musical theater will probably never happen again in our live-time, long live Rock ‘N’ Roll!