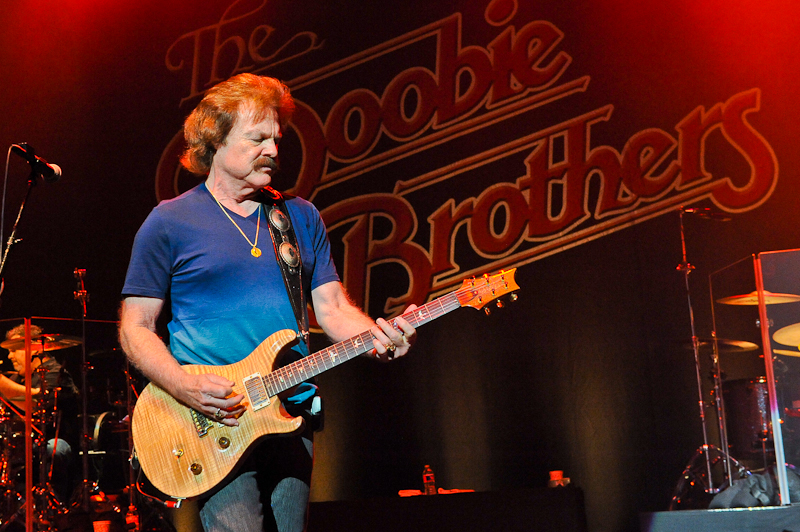 The Doobie Brothers Rock Down The Highway to The Moody Theater in Austin, Texas(Review)

AUSTIN, TX – April 27, 2015. The breezy spring evening made way for a variety of classic rock lovers as they moseyed past the iconic Willie Nelson statue outside of Austin’s Moody Theatre on Monday night, April 27th. Baby boomers sporting florescent Hawaiian shirts and broken in baseball caps whirled up the stairs to the will call table with their selfie-snapping families to let loose to the music of Matthew Curry, Don Felder, and The Doobie Brothers.

The long train of good ol’ rock and roll began early at 7:22 p.m. when guitar/vocalist Matthew Curry, bassist Tim Brickner, keyboardist Mike Nellas, and drummer Francis Valentino warmed up the crowd. Curry’s dexterous guitar riffs merged harmoniously with his bluesy, raw-edged singing voice on “Love Me Right.” With his suave aviator glasses and seasoned guitar licks, Curry could fool anyone about his young 19 years of age.

As the Matthew Curry fans returned to their seats after flocking to the first floor lobby for photos and autographs, the lights above the stage blinked to signal in the next group of soul rocking musicians. With a movie trailer-esque introduction inspiring bubbling anticipation, Don Felder and his band donned their instruments to open with The Eagles classics “Already Gone” and “One of These Nights.” Only Felder and his band could make their cool grey vests and suit jackets look both sophisticated and full of revelry, like respectable corporate businessmen ready to loosen up their ties after the first round of beers at happy hour.

When the audience’s pulse returned to a normal rate, Felder continued with “Don’t Have Me,” a gut-gurgling raw melody from his solo album “Road to Forever.” Written after his departure from The Eagles, this song of revenge-filled gusto was so satisfying that listeners instinctively threw up the two fingered rock and roll sign without missing a beat.

Felder traded his stinging electric guitar licks for a mellow acoustic serenade on “Tequila Sunrise” and then ditched his instrument completely for the a cappella opening of “Seven Bridges Road.” The guitar legend joked about how this song served as a warm up during The Eagles’ tours in the ‘70s and often pinpointed which musicians partied too hard the night before. Felder kept the familiar jukebox songs rolling with “Witchy Woman,” “Long Run,” “Heartache Tonight,” and “Fast Lane.” He ended the set seductively swinging his double necked guitar on “Hotel California.”

When the headlining Doobie Brothers cradled their instruments and mentally prepped for their set, the sounds from the audience decrescendoed to a low muffle. The lights beamed across the theater in reds and yellows as the eight piece band dove in to an almost psychedelic “Jesus is Just Alright.” Hands rose in to the air as if to worship the collective experience and men and women sprang on to their feet. Without so much as a measure in between, they segued in to “Rockin’ Down the Highway.” John McPhee busted out the pedal steel guitar and picked a rollicking solo during their self-proclaimed “hippie redneck” tunes from their 2010 album, “World Gone Crazy.” Marc Russo introduced the audience to his breathtakingly brash and electric saxophone playing following Guy Allison’s ear-tickling keyboard solo. The seamless tradeoff between band members transitioned to the opening chords for “Taking it to the Streets.” By this time, all remaining backs in chairs sprang up in unabashed enthusiasm. The flashing house lights highlighted dance moves ranging from manic over-the-head clapping to modest bent elbow fist pulsing. Regardless of personal dance styles, The Moody Theater erupted in a flashy concoction of movement, lights, and sound.

Just when the listeners believed the night had peaked, guitarist Patrick Simmons welcomed back Matthew Curry and introduced Asleep At The Wheel’s Ray Bensen to the stage. Bensen glowed in his white cowboy hat, pearl colored suit, and snowcapped ponytail. As he draped his guitar around his shoulder, the audience knew this evening could never be replicated. The resulting jam created an intoxicating flavor of blues and hard rock. Curry laughed as John McPhee subtly directed the musician’s paths and motioned him toward the limelight. Curry’s guitar licks flew from his fingers in a religious rapture so inspiring the audience couldn’t utter a sound. With a wave of his fingers, McPhee signaled the super group to tie off the jam end on a sustained chord.

“Black Water” and “Long Train Runnin’” completed The Doobie Brothers’ set, but the audience knew the show wasn’t over. After a brief reprieve, they returned for the song everyone was mentally manifesting: “China Grove.” The kaleidoscope of spinning lights returned once more for their final number “Listen to the Music.” When the voices from the floor level and upper mezzanines joined together for one last chorus, the infectious and tangible joy united the music lovers from all generations.