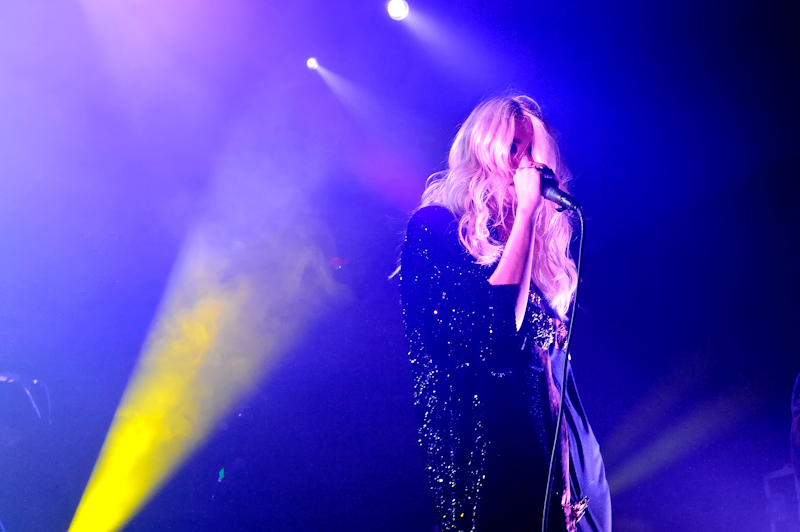 AUSTIN, TX – September 26, 2014 / The Pretty Reckless isn’t a vanity project from actress Taylor Momsen. The Pretty Reckless is her calling.  While the Zooey Deschanel’s and Jason Schwartzman’s of the world pair up with a prolific musician to do the heavy lifting – and only perform in limited high profile gigs–Momsen is a studiophile who earns her keep on the road. Their latest stop was Friday night at Emo’s in Austin.

Something was noticeably different with Emo’s; the dreaded drape was dropped, which cut the room in half.  The 1,700-capacity room was now made to hold 800, which may have not been met.  It’s no secret that Austin isn’t an alternative/hard rock/metal town–most national touring acts bypass the capital and take I-35 straight to San Antonio. The denizens of this fine musical city tend to opt for genres like chillwave, garage, experimental, dream-pop, and EDM shows.  But, for those present, if they cared any less it’d still be too much. They were here to see a kick-ass rock show and that’s exactly what they got.

The ladies in attendance dressed the part, capturing that Momsen aesthetic of shiny black leggings, partly clothed torsos with dark make-up, and perfectly curled locks.  Guys wore what they always wear once they’re off the clock: tees, jeans, and casual kicks.  The libations ordered most frequently were sugar-free red bulls with mid-shelf vodkas, and aluminum pints of beer brewed for the masses.

Kicking things off was the North Carolina outfit Falling Through April.  Out the gate, their first offering had a mid-2000’s popular punk affectation to it.  To some, that’s a deal breaker. However, below that sheen was insanely rich harmonies, 5-string bass moments that were noteworthy, and equally dense showman and musician-ships.

“Broken Feet” had a mature vibe and radio readiness about it.  A cover of Katy Perry’s “E.T.” endeared the group to FM/XM dial jumpers.  New songs like “Empire” and “In Control” showed a lot of promise and energy.  With Word-working guitar solos, interesting arrangements, and metal-like double-bass drums, the band can call upon its Rolodex of aural moments to get it out of any jam. In an era where niche is king, their niche may not have one.

Vegas hard rockers Adelitas Way put on the type of performance that had many rushing to the merch table to grab anything with their moniker on it.  It was an inspired performance.  Vocalist Rick DeJesus’ head practically touched the vaulted ceilings at Emo’s, but the only thing higher was his soaring vocals.

“The Collapse” is agro but in the forewarning sense as the riffage imposes its will over lyrics like “stay down or I’m gonna keep you down/I take, I don’t ask, this breath will be your last/do you feel the collapse.”  “Dog On A Leash” was unapologetic anthem rock.  In “Save The World,” DeJesus’ emotive note slinging over the power chord progression paired nicely.  The frontman partook in candor-laden banter, calling attention to the scant faces in the venue.

“People always say rock bands don’t play in Austin, but looking at all of your faces, there’s a great rock community here,” he said.

The dynamic “Stuck” saw the ever-active drummer shine, and after “Criticize” the loudspeakers were begging for mercy. A sing-along broke out and “Invincible” was just as infectious as the apex-passion in which the band played it.   DeJesus left saying he’d hope to be back in Austin, and here’s hoping that the love that was given from the crowd was enough to woo a return from them.

After a 30-minute scene change, it was time for lights, (smartphone) cameras, and action (in the form of a pre-recorded clip of Momsen moaning and making sex noises)–”Follow Me Down” was upon us. The pocket-sized Momsen’s deep–almost 80’s rocker, male tenor– vocals looms over her stature and intimidates anyone who firsts encounters her amplified timbre.

“Follow Me Down” was a raucous rhapsody with metal licks, alternative-rock hooks, bluesy-acoustic breakdowns, and a soft-spoken bridge. The cut encompassed the rage of this style-disparate group. “Since You Been Gone” was moxie personified. Momsen, with her voluminous golden-locks shrouding her symmetrical face, slithered her person on stage as she slid up and down vox scales while bassist Mark Damon bludgeoned the strings of his instrument.

The theatrical “Sweet Things” saw the frontwoman draped over the mic stand as guitarist Ben Phillips strangled the neck of his axe while both exchanged haunting call and response lines.  A caterwaul from the leading lady, quickly followed by Phillips melodious breathes, upped the set’s ante after only three numbers.

In what was the poppiest and most wordplay-laced piece of the night, “Miss Nothing” had the female persuasion singing along to every word as if a karaoke monitor was where the band stood.   Momsen wasn’t much for banter in between tunes, which is ironic since her biggest claim to fame was being on a show called Gossip Girl.  With awful jokes that should have been removed in editing after us, Ben Phillips later gave a little insight that Momsen had a 101 fever, but still insisted on playing.
“Cold Blooded” was a warm-blooded sultry blues-rock composition that boasted sonic dynamics throughout.  At one point during an instrumental jam, Momsen acted as a conductor by riling up the concertgoers with hand movements, only to wait until they went silent for her to sing.  Exit Momsen, enter even more aggressive soloing during the same song.  Wah pedals screeched, basslines marched, and the crowd cheered for various reasons.

The next aria was dedicated to a very special person in the audience to the singer.  She left it vague, but clearly she was speaking of her sister  who–after a Google image search–I saw standing at the sound booth, documenting her sibling performance with her iPhone.  The minute long ballad “Dear Sister” features a George Harrison-esque structure, and made for a brief moment of introspection.

With a memorable riff, wordless howls, and note sustainability, “Absolution” temporarily held the championship belt for the most electrifying cut of the set.  An unappreciated and unnecessary Orson Welles snippet led into “Why’d You Bring AShotgun To The Party.”  It made a partisan statement, but more importantly, had bodies moving together bipartisan-ly.

The band’s first ever single, “Make Me Wanna Die,” holds up with the newer material but only from a nostalgia standpoint.  Frankly, the group has grown immensely as tunesmiths with their latest offering.  Percussion-technician Jamie Perkins’ cymbals took the lead in “Heaven Knows”–one of the two number one hits for the group on the Billboard mainstream rock charts.  “Heaven Knows” was an anthem chanted from the top of everyone’s lungs that renounced salvation and made peace with damnation.

Ladies and gentlemen, your (Pabst) blue ribbon winner for best in show goes to “Going To Hell.”  The hurried anti-hymnal was dazzling and reaffirmed that Momsen is no longer merely an acolyte of hard rock, but now a minister. For an encore, the quartet played their current number one chart topper, “Fucked Up World.”   There are practically 10 different hooks in this track.  Inexplicably–yet welcomed– Momsen and her guitarists exited and drummer Perkins went into a four minute skins solo on an empty stage complete with bongos and a determined look. They then returned and nailed their coda.
Momsen is 21 with two albums under her belt–with the most recent one receiving critical acclaim. The sky’s the limit for her rock career. Despite being ill, being on the road since March, and a smaller house than the band is accustomed to playing, Momsen didn’t phone-in a nano-second of the gig.  The Pretty Reckless are in total control of a stunning career that will take them far.