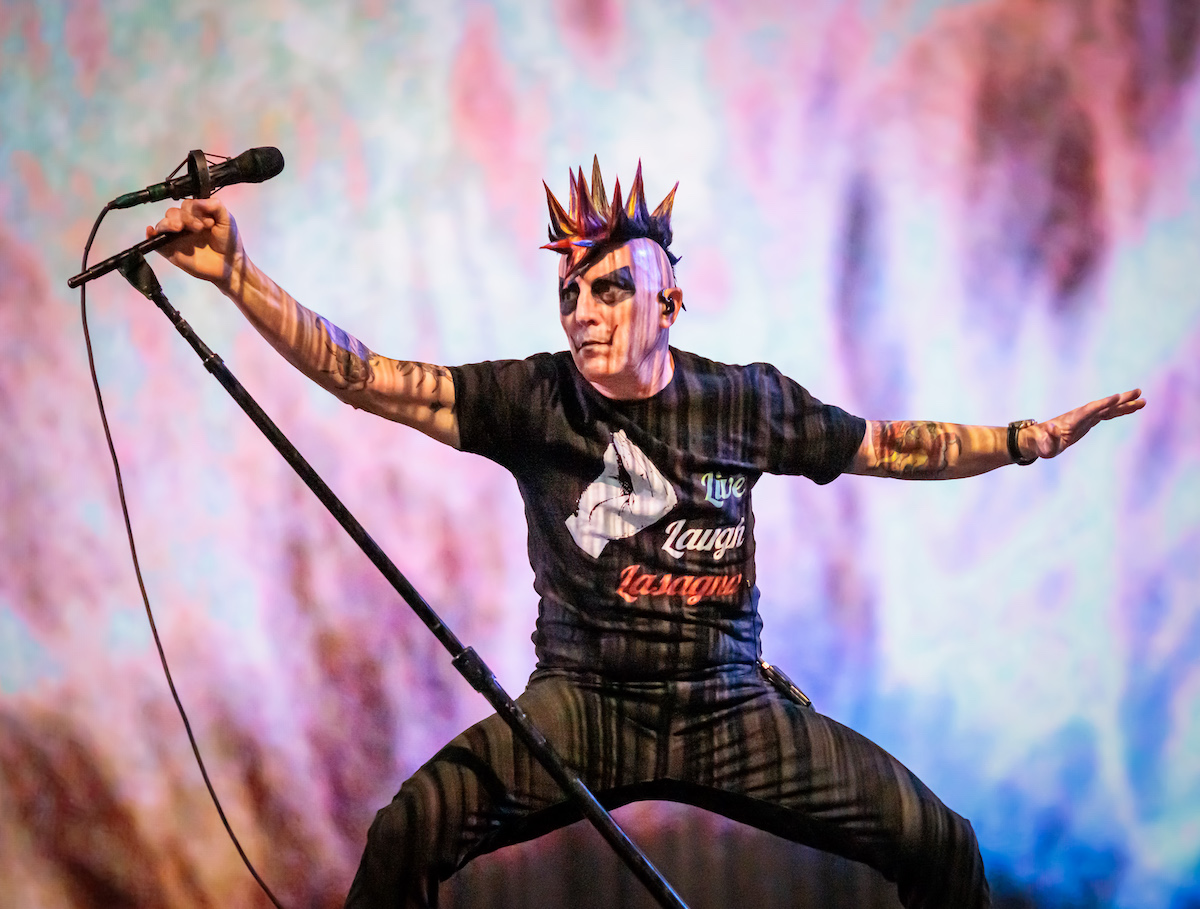 FEBRUARY 2, 2022 – SAN ANTONIO, TX: If you spend an hour in San Antonio with an FM radio, it won’t be long until you are reminded that it is a Tool town. Of course, it comes as no surprise that when the band embarked on the 2nd leg of their “Fear Inoculum” tour, they would visit the adoring fans of the AT&T Center, where the pre-pandemic album tour had a stop in 2019.

Perhaps appropriate for a band with a certain veil of mystery, the band appeared behind a literal veil that was less of a curtain and more of a wraparound series of strings through which the band could be seen. The crowd erupted at the opening percussion sounds and guitar swells from Adam Jones as the band started into “Fear Inoculum.” Like many of the songs in the Tool repertoire, the slow build created anticipation, slowly bringing in bassist Justin Chancellor before vocalist Maynard James Keenan sang the first few bars, sending the night into motion with a fantastic opening song.

Per usual, Keenan spent most of the performance perched atop platforms at the back of the stage flanking either side of drummer Danny Carey. Chatter was kept to a minimum, with Kennan only addressing the crowd at the end of the show, and during “Opiate” to tell a humorous story about how his lunch of Moo Goo Gai Pan was stolen in transit, along with his GrubHub driver’s car.

After the first four songs of the 13 song set, the curtain finally opened exposing giant video boards, laser lighting and fully revealing the band. The moment felt momentous as the band went into their mesmerizing track “Pneuma,” a song and performance that fully encapsulated the Tool experience. The song featured every band member in top form, with Carey leading the way with complex drum beats and fills that have been the subject of many YouTube reaction videos. It also served as a brilliant display of the complexity of the music. Each member was ostensibly playing something completely different, yet it all coalesced in a way that truly comes into full focus when experienced live. The high wire act of listening to and watching Tool navigate complicated songs with ease is worth the price of admission alone.

One of the highlights of the night was the constant video imagery displayed on the video boards. Not only was the band backed by a giant video screen, but angled boards on either side of the stage created a wrap-around atmosphere for classic trippy Tool imagery full of third eyes and stop motion graphics. After a trio of songs from the “Lateralus” album, the band closed out the first set with one of only a couple of radio hits of the night, “Hooker with a Penis,” which featured Keenan ditching the microphone for megaphone speaker vocals, leading directly into a timed intermission.

One wouldn’t blame you for keying in on drummer Danny Carey for the entire show, so the extended drum solo “Chocolate Chip Trip” right out of intermission served as a much deserved spotlight for the clear star of the show. The solo featured Carey noodling with odd sounds before showing a fantastic display of total mastery of the instrument, accentuated on the video board with kaleidoscope effect aerial cameras.

For a refreshing change of pace, Jones, Chancellor and Keenan then gathered in chairs at the edge of the stage to perform a version of the scaled down “Culling Voices.” The sound gorgeously echoed throughout the venue as purple confetti flowed from the ceilings for the slower paced song. It also gave the front of the crowd a rare close up view of Keenan before heading back to his perch to close the show with “Invincible,” capping off a memorable night of incredible music and awesome trippy visuals that only a legendary band like Tool can provide.

Special thanks to Ralph Arvesen for show photos – www.instagram.com/ralpharvesen